A Gift For Terra

by Fox B. Holden 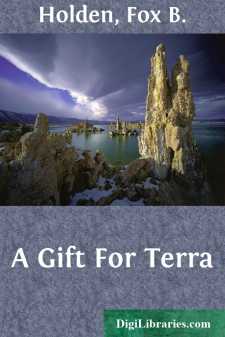 His head hurt like blazes, but he was alive, and to be alive meant fighting like hell to stay that way.

That was the first thing returning consciousness told him. The next was that his helmet should have been cracked wide open when the bum landing had wrenched the acceleration hammocks out of their suspension sockets and heaved his suited body across the buckled conning deck. It should've been, but it wasn't.

The third thing he knew was that Ferris' helmet had been smashed into a million pieces, and that Ferris was dead.

Sand sifted in a cold, red river through the gaping rent in the side of the ship, trying to bury him before he could stand up and get his balance on the crazily tilted deck. He shook loose with more strength than he needed, gave the rest of the muscles in his blocky body a try, and there wasn't any hurt worse than a bruise. Funny. Ferris was dead.

He had a feeling somewhere at the edge of his brain that there was going to be more to it than just checking his oxygen and food-concentrate supply and walking away from the ship. A man didn't complete the first Earth-Mars flight ever made, smash his ship to hell, and then just walk away from it. His astrogeologer-navigator was dead, and the planet was dead, so a man just didn't walk away.

There was plenty of room for him to scramble through the yawning rip in the buckled hullplates—just a matter of crawling up the river of red sand and out; it was as easy as that.

Then Johnny Love was on his feet again, and the sand clutched at his heavy boots as though to keep him from leaving Ferris and the ship, but it didn't, and he was walking away....

Even one hundred and forty million miles from the Sun, the unfiltered daylight was harsh and the reflection of it from the crimson sand hurt his eyes. The vault of the blue-black sky was too high; the desert plain was too flat and too silent, and save for the thin Martian wind that whorled delicately-fluted traceries in the low dunes that were the only interruption in the flatness, there was no motion, and the planet was too still.

Johnny Love stopped his walking. Even in the lesser gravity, it seemed too great an effort to place one booted foot before the other. He looked back, and the plume of still-rising smoke from the broken thing that had been his ship was like a solid black pillar that had been hastily built by some evil djinn.

How far had he walked; how long?

He turned his back on the glinting speck and made his legs move again, and there was the hollow sound of laughter in his helmet. Here he was, Johnny Love, the first Martian! and the last! Using the last of the strength in his bruised body to go forward, when there was no forward and no backward, no direction at all; breathing when there was no purpose in breathing.

Why not shut off the valves now?

But he had come to see, and he was seeing, and in the remaining hours left to him he would see what no man had seen in a half a million years....