A General History and Collection of Voyages and Travels - Volume 14 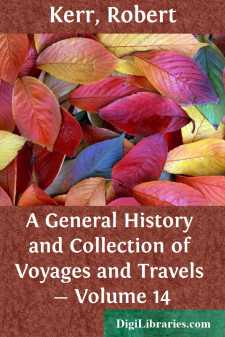 Whether the unexplored part of the Southern Hemisphere be only an immense mass of water, or contain another continent, as speculative geography seemed to suggest, was a question which had long engaged the attention, not only of learned men, but of most of the maritime powers of Europe.

To put an end to all diversity of opinion about a matter so curious and important, was his majesty's principal motive in directing this voyage to be undertaken, the history of which is now submitted to the public.[1]

[1] It is scarcely conceivable, that any men of science in the end of the 18th century, should have insisted on mathematical reasons for the supposition of a southern counterpoise; and therefore, as is mentioned by Mr Wales, in his introduction to the account of the astronomical observations made during this voyage, it must be held, that the opinion which induced his majesty to order the voyage, for the purpose of discovering a continent or large islands towards the South Pole, was founded on mere probability. That there is no necessity for such an existence, is very certain, for the preservation of the earth's motion on its axis can be readily accounted for without it; yet, reasoning from analogy, and considering the successful experiment of Columbus, there seemed sufficient grounds, independent of the alleged discoveries of Bouvet and others, to expect that some lands might be found there. After this, it required little additional excitement of fancy to believe, that if there, and if found, they might be no less important to the discoverers, than America was judged to be to the Spaniards. Men are not easily cured of their prejudices, when the foundations on which they are built, derive validity from the hope of interest. It is impossible to tell what kind and degree of advantages, certain sanguine specialists anticipated from the Terra Australis. Excepting the article of the prolongation of life ad infinitum, it is questionable, if the philosopher's stone, when discovered, could have accomplished more; and even with respect to that, it might have been imagined, that the soil and climate would so materially differ from any other before known, as to yield some sovereign elixir or plant of life-giving efficacy. That it was charitably hoped, they would be no less serviceable in another particular, of perhaps fully greater consequence, may be inferred from a passage in Dr Hawkesworth's reply to Mr Dalrymple, appended to his Account of Cook's First Voyage, &c., second edition. "I am very sorry," says he, "for the discontented state of this good gentleman's mind, and most sincerely wish that a southern continent may be found, as I am confident nothing else can make him happy and good-humoured!" Mr Dalrymple seems to have set no bounds to his expectations from the discovery, and accordingly thought that no bounds ought to be set to the endeavours to accomplish it. Witness the very whimsical negative and affirmative dedication of his Historical Collection of Voyages, &c....
Show more
Show less