A General History and Collection of Voyages and Travels - Volume 08 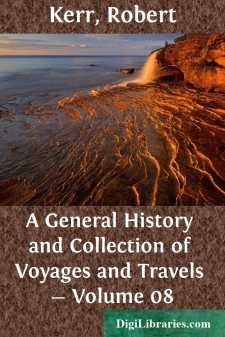 EARLY VOYAGES OF THE ENGLISH. TO THE EAST INDIES, BEFORE THE ESTABLISHMENT OF AN EXCLUSIVE COMPANY.

I departed from London in the Tiger on Shrove-Tuesday, 1583, in company with Mr John Newberry, Mr Ralph Fitch, and six or seven other honest merchants, and arrived at Tripoli in Syria on the next ensuing 1st of May. On our arrival, we went a Maying on the Island of St George, where the Christians who die here on ship board are wont to be buried. In this city of Tripoli our English merchants have a consul, and all of the English nation who come here reside along with him, in a house or factory, called Fondeghi Ingles, which is a square stone building, resembling a cloister, where every person has his separate chamber, as is likewise the custom of all the other Christian nations at this place.

[Footnote 1: Hakluyt, II. 402. As Eldred accompanied Newberry and Fitch from England to Basora, this article is, in a great degree, connected with our present purpose: It may likewise be mentioned, that Eldred is one of the persons with whom Newberry corresponded.--E.]

Tripolis stands under a part of Mount Lebanon, at the distance of two English miles from the port. On one side of this port, in the form of a half-moon, there are five block-houses, or small forts, in which there are some good pieces of artillery, and they are occupied by about an hundred janisaries. Right before the town there is a hill of shifting sand, which gathers and increases with a west wind, insomuch, that they have an old prophecy among them, that this sand hill will one day swallow up and overwhelm the town, as it every year increases and destroys many gardens, though they employ every possible device to diminish this sand-bank, and to render it firm ground. The city is walled round, though of no great strength, and is about the size of Bristol: Its chief defence is the citadel or castle, which stands on the south side of the town, and within the walls, overlooking the whole town, being armed with some good artillery, and garrisoned by two hundred janisaries. A river passes through the middle of the city, by means of which they water their gardens and plantations of mulberry trees, on which they rear great numbers of silk-worms, which produce great quantities of white silk, being the principal commodity of this place, which is much frequented by many Christian merchants, as Venetians, Florentines, Genoese, Marsilians, Sicilians, and Ragusans, and, of late, by the English, who trade more here than in any other port of the Turkish dominions.

I departed from Tripolis with a caravan, on the 14th May, passing, in three days, over the ridge of Mount Libanus; and at the end of that time came to the city of Hammah, which stands in a goodly plain, abounding in corn and cotton-wool. On these mountains grow great quantities of gall-trees, which are somewhat like our oaks, but less, and more crooked; and, on the best trees, a man shall not find above a pound of galls on each....