A Garland for Girls 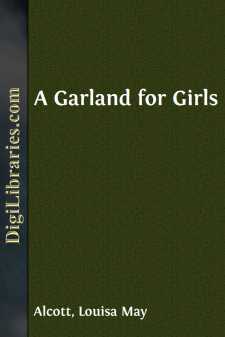 Being Boston girls, of course they got up a club for mental improvement, and, as they were all descendants of the Pilgrim Fathers, they called it the Mayflower Club. A very good name, and the six young girls who were members of it made a very pretty posy when they met together, once a week, to sew, and read well-chosen books. At the first meeting of the season, after being separated all summer, there was a good deal of gossip to be attended to before the question, "What shall we read?" came up for serious discussion.

Anna Winslow, as president, began by proposing "Happy Dodd;" but a chorus of "I've read it!" made her turn to her list for another title.

"'Prisoners of Poverty' is all about workingwomen, very true and very sad; but Mamma said it might do us good to know something of the hard times other girls have," said Anna, soberly; for she was a thoughtful creature, very anxious to do her duty in all ways.

"I'd rather not know about sad things, since I can't help to make them any better," answered Ella Carver, softly patting the apple blossoms she was embroidering on a bit of blue satin.

"But we might help if we really tried, I suppose; you know how much Happy Dodd did when she once began, and she was only a poor little girl without half the means of doing good which we have," said Anna, glad to discuss the matter, for she had a little plan in her head and wanted to prepare a way for proposing it.

"Yes, I'm always saying that I have more than my share of fun and comfort and pretty things, and that I ought and will share them with some one. But I don't do it; and now and then, when I hear about real poverty, or dreadful sickness, I feel so wicked it quite upsets me. If I knew HOW to begin, I really would. But dirty little children don't come in my way, nor tipsy women to be reformed, nor nice lame girls to sing and pray with, as it all happens in books," cried Marion Warren, with such a remorseful expression on her merry round face that her mates laughed with one accord.

"I know something that I COULD do if I only had the courage to begin it. But Papa would shake his head unbelievingly, and Mamma worry about its being proper, and it would interfere with my music, and everything nice that I especially wanted to go to would be sure to come on whatever day I set for my good work, and I should get discouraged or ashamed, and not half do it, so I don't begin, but I know I ought." And Elizabeth Alden rolled her large eyes from one friend to another, as if appealing to them to goad her to this duty by counsel and encouragement of some sort.

"Well, I suppose it's right, but I do perfectly hate to go poking round among poor folks, smelling bad smells, seeing dreadful sights, hearing woful tales, and running the risk of catching fever, and diphtheria, and horrid things. I don't pretend to like charity, but say right out I'm a silly, selfish wretch, and want to enjoy every minute, and not worry about other people. Isn't it shameful?"

Maggie Bradford looked such a sweet little sinner as she boldly made this sad confession, that no one could scold her, though Ida Standish, her bosom friend, shook her head, and Anna said, with a sigh: "I'm afraid we all feel very much as Maggie does, though we don't own it so honestly....