A Gallant Grenadier A Tale of the Crimean War 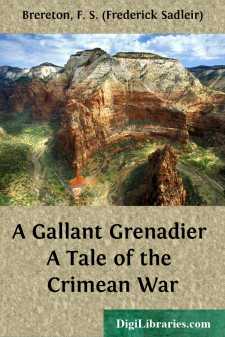 “You positively annoy me, Joseph, and make me feel more angry than I care to admit. The matter is a serious one, and I am deeply distressed. After thirteen years of the most careful bringing-up there is complete and absolute failure. It is a miserable reward. And then, to make matters worse, you laugh at me, and egg the lad on to even greater crimes!”

“Fiddlesticks, sir! Humbug! A miserable reward indeed!” was the spirited answer. “No one but yourself would admit it. He is a fine lad, though a little wild I will own; but for all that a generous, good-hearted boy. Let him alone! Don’t worry him with all these goody-goody ideas. There is plenty of time for him to settle down, and meanwhile he will come to no harm, and, I’ll be bound, will bring no discredit on you.” The speaker shook his head knowingly, and helped himself to a large pinch of snuff.

“How can you argue like that, Joseph, when you know what the lad has done?” the former speaker replied with much sternness. “I hold practical joking to be at any time disgraceful, but when one’s adopted son is one of three who actually laid a booby-trap for the mayor of this town in broad daylight, and made him a laughing-stock for all, then discreditable is the least one can say of it. It is positively scandalous.”

“Nonsense, Edward! Barrington deserved all he got. He is an odious man, and the fright those youngsters gave him will teach him to mind his own business in future, and not meddle with other people’s affairs. Serve him right, I say! Just because a lad breaks one of his windows with a catapult, and by pure accident, he gets the following half-holiday stopped for the whole school. If he hadn’t blustered so much, and looked so fierce, I’ve no doubt the culprit would have given himself up; but he was afraid of the consequences, and most naturally, too. Ha, ha, ha! It was funny! I saw his worship immediately after he had fallen a victim to the joke. He was quivering with mingled fear and rage, and the laughter of the by-standers did not help to soothe him.”

Joseph threw himself violently back in his chair, causing it to creak in an alarming manner and almost overturn, and gave vent to roars of laughter, followed by chuckles of intense amusement, produced in such deep tones that they seemed to come from the smart Wellingtons he wore. He was a stout, comfortable-looking man of middle height, with a round, clean-shaven face, which, now that he was laughing, was as red as fire and wrinkled in all directions. He had a shiny head, almost devoid of hair, and a double chin which half hid the wide collar and large bow he wore, while smartly-cut trousers and coat, a wide expanse of shirt front, and a double-breasted waistcoat, which seemed almost too small to reach across his massive chest and “corporation”, completed an appearance which made Joe Sweetman remarkable. He looked a gentleman all over, and his merry laugh and jovial manner made one certain at once that he was a general favourite....