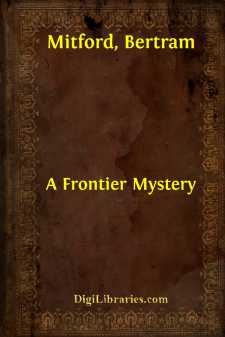 “Ha! Calves of Matyana, the least of the Great One’s cattle.”

“Sweepings of the Abe Sutu!”

Such were but few of the opprobrious phrases, rolled forth alternately, in the clear sonorous Zulu, from alternate sides of the river, which flowed laughing and bubbling on in the sunlight, between its high banks of tree-shaded rocks. Yet in spite of the imputation of “whiteness” made by the one, they of the other party were in no shade of bronze duskiness removed from those who made it. Each party numbered about a dozen: young men all, with the same lithe straight forms destitute of all clothing but a skin mútya; armed with the same two or three assegais and a knobstick apiece, eke small hide shields. There was no outward visible difference between them, as how indeed, should there be, since both were sprung from absolutely the same stock? But the difference was essential for all that, for whereas one party dwelt upon the Natal side of the river, the other was composed of warriors of the king, the limits of whose territory they dared not overstep.

“Come over and fight!” challenged the latter, waving their shields.

Here was an impasse. Brimming over with fight as they were, the first hesitated to embark on what would amount to nothing less than a raid upon English territory; for did the news of it reach the ears of the King—as it almost certainly would—why death to the whole lot of them was the least they could expect. On the other hand if the Natal party could be induced to cross why they would make such an example of these Amakafula—as they contemptuously called them—that the latter, for very shame’s sake, would be only too careful to say nothing at all of the affair.

“We leave not our land,” came the answer to this after a hesitating pause. “Cross ye hither, cowards. Ye are more than us by two.”

“Ah—ah! But we shall be less by more than two when we reach the bank. You will strike us in the water.”

“We will not,” called out the spokesman on the Zulu side. “You shall even have time to recover breath. Is it not so, brothers?”

The awful name rolled forth sonorously from every throat. An oath ratified on the name of the greatest king their world had ever known was ratified indeed. Hardly had it sounded than a joyful whoop rent the air. A dozen bronze bodies flashed in the sunlight and amid a mighty splash a dozen dark heads bobbed up above the surface of the long deeply flowing reach. A moment later, and their owners had ploughed their way to the other side, and emerged streaming from the river, their shields and weapons still held aloft in the left hand, as they had been during the crossing in order to keep them dry.

“We will drop our weapons, and fight only with sticks, brothers,” proposed the Zulu leader....