A Frenchman in America Recollections of Men and Things 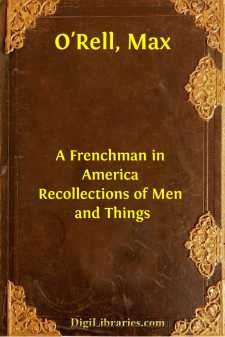 In the order of things the Teutonic was to have sailed to-day, but the date is the 25th of December, and few people elect to eat their Christmas dinner on the ocean if they can avoid it; so there are only twenty-five saloon passengers, and they have been committed to the brave little Celtic, while that huge floating palace, the Teutonic, remains in harbor.

Little Celtic! Has it come to this with her and her companions, the Germanic, the Britannic, and the rest that were the wonders and the glory of the ship-building craft a few years ago? There is something almost sad in seeing these queens of the Atlantic dethroned, and obliged to rank below newer and grander ships. It was even pathetic to hear the remarks of the sailors, as we passed the Germanic who, in her day, had created even more wondering admiration than the two famous armed cruisers lately added to the “White Star” fleet.

I know nothing more monotonous than a voyage from Liverpool to New York.

Nine times out of ten—not to say ninety-nine times out of a hundred—the passage is bad. The Atlantic Ocean has an ugly temper; it has forever got its back up. Sulky, angry, and terrible by turns, it only takes a few days’ rest out of every year, and this always occurs when you are not crossing.

And then, the wind is invariably against you. When you go to America, it blows from the west; when you come back to Europe, it blows from the east. If the captain steers south to avoid icebergs, it is sure to begin to blow southerly.

Doctors say that sea-sickness emanates from the brain. I can quite believe them. The blood rushes to your head, leaving your extremities cold and helpless. All the vital force flies to the brain, and your legs refuse to carry you. It is with sea-sickness as it is with wine. When people say that a certain wine goes up in the head, it means that it is more likely to go down to the feet.

There you are, on board a huge construction that rears and kicks like a buck-jumper. She lifts you up bodily, and, after well shaking all your members in the air several seconds, lets them down higgledy-piggledy, leaving to Providence the business of picking them up and putting them together again. That is the kind of thing one has to go through about sixty times an hour. And there is no hope for you; nobody dies of it.

“YOUR LEGS REFUSE TO CARRY YOU.”

Under such conditions, the mental state of the boarders may easily be imagined. They smoke, they play cards, they pace the deck like bruin pacing a cage; or else they read, and forget at the second chapter all they have read in the first. A few presumptuous ones try to think, but without success. The ladies, the American ones more especially, lie on their deck chairs swathed in rugs and shawls like Egyptian mummies in their sarcophagi, and there they pass from ten to twelve hours a day motionless, hopeless, helpless, speechless....