A Footnote to History Eight Years of Trouble in Samoa 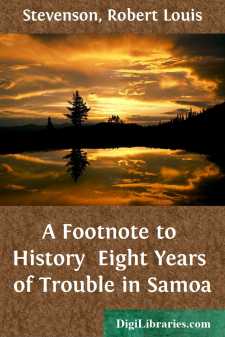 The story I have to tell is still going on as I write; the characters are alive and active; it is a piece of contemporary history in the most exact sense.  And yet, for all its actuality and the part played in it by mails and telegraphs and iron war-ships, the ideas and the manners of the native actors date back before the Roman Empire.  They are Christians, church-goers, singers of hymns at family worship, hardy cricketers; their books are printed in London by Spottiswoode, Trübner, or the Tract Society; but in most other points they are the contemporaries of our tattooed ancestors who drove their chariots on the wrong side of the Roman wall.  We have passed the feudal system; they are not yet clear of the patriarchal.  We are in the thick of the age of finance; they are in a period of communism.  And this makes them hard to understand.

To us, with our feudal ideas, Samoa has the first appearance of a land of despotism.  An elaborate courtliness marks the race alone among Polynesians; terms of ceremony fly thick as oaths on board a ship; commoners my-lord each other when they meet—and urchins as they play marbles.  And for the real noble a whole private dialect is set apart.  The common names for an axe, for blood, for bamboo, a bamboo knife, a pig, food, entrails, and an oven are taboo in his presence, as the common names for a bug and for many offices and members of the body are taboo in the drawing-rooms of English ladies.  Special words are set apart for his leg, his face, his hair, his belly, his eyelids, his son, his daughter, his wife, his wife’s pregnancy, his wife’s adultery, adultery with his wife, his dwelling, his spear, his comb, his sleep, his dreams, his anger, the mutual anger of several chiefs, his food, his pleasure in eating, the food and eating of his pigeons, his ulcers, his cough, his sickness, his recovery, his death, his being carried on a bier, the exhumation of his bones, and his skull after death.  To address these demigods is quite a branch of knowledge, and he who goes to visit a high chief does well to make sure of the competence of his interpreter.  To complete the picture, the same word signifies the watching of a virgin and the warding of a chief; and the same word means to cherish a chief and to fondle a favourite child.

Men like us, full of memories of feudalism, hear of a man so addressed, so flattered, and we leap at once to the conclusion that he is hereditary and absolute.  Hereditary he is; born of a great family, he must always be a man of mark; but yet his office is elective and (in a weak sense) is held on good behaviour.  Compare the case of a Highland chief: born one of the great ones of his clan, he was sometimes appointed its chief officer and conventional father; was loved, and respected, and served, and fed, and died for implicitly, if he gave loyalty a chance; and yet if he sufficiently outraged clan sentiment, was liable to deposition.  As to authority, the parallel is not so close.  Doubtless the Samoan chief, if he be popular, wields a great influence; but it is limited.  Important matters are debated in a fono, or native parliament, with its feasting and parade, its endless speeches and polite genealogical allusions.  Debated, I say—not decided; for even a small minority will often strike a clan or a province impotent.  In the midst of these ineffective councils the chief sits usually silent: a kind of a gagged audience for village orators.  And the deliverance of the fono seems (for the moment) to be final.  The absolute chiefs of Tahiti and Hawaii were addressed as plain John and Thomas; the chiefs of Samoa are surfeited with lip-honour, but the seat and extent of their actual authority is hard to find....