A Fool There Was 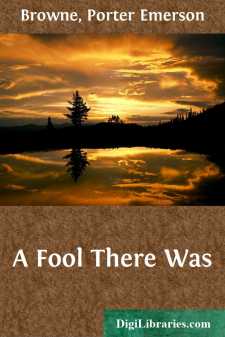 CHAPTER ONE. OF CERTAIN PEOPLE.

To begin a story of this kind at the beginning is hard; for when the beginning may have been, no man knows. Perhaps it was a hundred years ago—perhaps a thousand—perhaps ten thousand; and it may well be, yet longer ago, even, than that. Yet it can be told that John Schuyler came from a long line of clean-bodied, clean-souled, clear-eyed, clear-headed ancestors; and from these he had inherited cleanness of body and of soul, clearness of eye and of head. They had given him all that lay in their power to give, had these honest, impassive Dutchmen and—women—these broad-shouldered, narrow-hipped English; they had amalgamated for him their virtues, and they had eradicated for him their vices; they had cultivated for him those things of theirs that it were well to cultivate; and they had plucked ruthlessly from the gardens of heredity the weeds and tares that might have grown to check his growth. And, doing this, they had died, one after another, knowing not what they had done—knowing not why they had done it—knowing not what the result would be—doing that which they did because it was in them to do it; and for no other reason save that. For so it is of this world.

First, then, it is for you to know these things that I have told. Secondly, it is for you to realize that there are things in this world of which we know but little; that there are other things of which we may sometime learn; that there are infinitely more things that not even the wisest of us may ever begin to understand. God chooses to tell us nothing of that which comes after; and of that which comes therein He lets us learn just enough that we may know how much more there is.

And knowing and realizing these things, we may but go back as far toward the beginning as it is in our power to see.

Before the restless, never-ebbing of the tides of business had overwhelmed it with a seething flood of watered stocks and liquid dollars, there stood on a corner of Fifth Avenue and one of its lower tributaries, a stern, heavy-portalled mansion of brownstone. It was a house not forbidding, but dignified. Its broad, plate-glass windows gazed out in silent, impassive tolerance upon the streams of social life that passed it of pleasant afternoons in Spring and Fall—on sleet-swept nights of winter when 'bus and brougham brought from theatre and opera their little groups and pairs of fur-clad women and high-hatted men. It was a big house—big in size—big in atmosphere—big in manner.

At its left there was another big house, much like the one that I have already described. It was possibly a bit more homelike—a bit less dignified; for, possibly, its windows were a trifle more narrow, and its portal a little less imposing. And across from that there lay a smaller house—a house of brick; and this was much more inviting than either of the others; for one might step from the very sidewalk within the broad hall, hung with two very, very old portraits and lighted warmly with shades of dull yellow, and of pink....