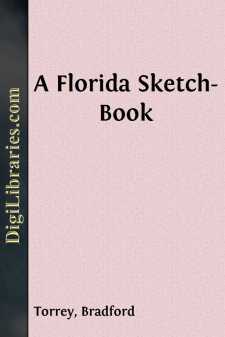 In approaching Jacksonville by rail, the traveler rides hour after hour through seemingly endless pine barrens, otherwise known as low pine-woods and flat-woods, till he wearies of the sight. It would be hard, he thinks, to imagine a region more unwholesome looking and uninteresting, more poverty-stricken and God-forsaken, in its entire aspect. Surely, men who would risk life in behalf of such a country deserved to win their cause.

Monotonous as the flat-woods were, however, and malarious as they looked,—arid wastes and stretches of stagnant water flying past the car window in perpetual alternation, I was impatient to get into them. They were a world the like of which I had never seen; and wherever I went in eastern Florida, I made it one of my earliest concerns to seek them out.

My first impression was one of disappointment, or perhaps I should rather say, of bewilderment. In fact, I returned from my first visit to the flat-woods under the delusion that I had not been into them at all. This was at St. Augustine, whither I had gone after a night only in Jacksonville. I looked about the quaint little city, of course, and went to the South Beach, on St. Anastasia Island; then I wished to see the pine lands. They were to be found, I was told, on the other side of the San Sebastian. The sun was hot (or so it seemed to a man fresh from the rigors of a New England winter), and the sand was deep; but I sauntered through New Augustine, and pushed on up the road toward Moultrie (I believe it was), till the last houses were passed and I came to the edge of the pine-woods. Here, presently, the roads began to fork in a very confusing manner. The first man I met— a kindly cracker—cautioned me against getting lost; but I had no thought of taking the slightest risk of that kind. I was not going to explore the woods, but only to enter them, sit down, look about me, and listen. The difficulty was to get into them. As I advanced, they receded. It was still only the beginning of a wood; the trees far apart and comparatively small, the ground covered thickly with saw palmetto, interspersed here and there with patches of brown grass or sedge.

In many places the roads were under water, and as I seemed to be making little progress, I pretty soon sat down in a pleasantly shaded spot. Wagons came along at intervals, all going toward the city, most of them with loads of wood; ridiculously small loads, such as a Yankee boy would put upon a wheelbarrow. "A fine day," said I to the driver of such a cart. "Yes, sir," he answered, "it's a pretty day." He spoke with an emphasis which seemed to imply that he accepted my remark as well meant, but hardly adequate to the occasion. Perhaps, if the day had been a few shades brighter, he would have called it "handsome," or even "good looking." Expressions of this kind, however, are matters of local or individual taste, and as such are not to be disputed about. Thus, a man stopped me in Tallahassee to inquire what time it was. I told him, and he said, "Ah, a little sooner than I thought." And why not "sooner" as well as "earlier"?...