A Floral Fantasy in an Old English Garden 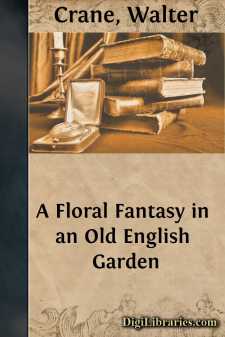 Of old in Rosamond's Bower,With it's peacock hedges of yew,One could never find the flowerUnless one was given the clue;So take the key of the wicket,Who would follow my fancy free,By formal knot and clipt thicket,And smooth greensward so fair to see

And while Time his scythe is whetting,Ere the dew from the grass has gone,

The Four Seasons' flight forgetting,As they dance round the dial stone;

With a leaf from an old English book,A Jonquil will serve for a pen.

Let us note from the green arbour's nook,Flowers masking like women and men.

While PRETTY MAIDS all of them passWith careless hearts quite unheeding.

Next, a knight with his flaming targeSee the DENT-DE-LION so boldWith his feathery crest at large,On a field of the cloth of gold.

In the race of the flowers that's run due,

As the HARTSTONGUE pants at the well

And the HOUNDSTONGUE laps the SUNDEW.

Glad in purple and gold so fair,Though the DEADLY NIGHTSHADE'S upon her.

Behold LONDON PRIDE robed & crowned,Ushered in by the GOLDEN ROD,While a floral crowd press around,Just to win from her crest a nod.

The FOXGLOVES are already on.Not only in pairs but dozens;They've come out to see all the fun,With sisters and aunts and cousins.

The STITCHWORK looked up with a sighAt BATCHELOR'S BUTTONS unsewn:

Single Daisies were not in her eye,For the grass was just newly mown.

The HORSE-TAIL, 'scaped from WOLFE'S CLAW,Rides off with a LADIES' LAGES.

The SNAPDRAGON opened his jaw,But, at sight of Scotch THISTLE, turned pale:

He'd too many points of the lawFor a dragon without a scale.

Little JENNY-CREEPER lay low,Till happy thoughts made her gladder;How to rise in the world she'd know,So she climbed up JACOB'S LADDER

While EYEBRIGHT observes from her nook,And wonders he could be so silly.

A LANCE FOR A LAD 'gainst KING'S SPEAR.When the BUGLE sounds for the play

A LADIES MANTLE flaunting thereIs the banner that leads the fray.

'Twas lost in the wood in a summer showerWhen the CLOWN'S WORT tried to trip her.

On a LADIES' CUSHION sits THRIFTShe never wastes, or steals, or begs,But she can't give poor RAGWORT a lift.

QUEEN OF THE MEADS is MEADOWSWEET,In the realm of grasses wide:

But not in all her court you meetThe turbaned TURK'S HEAD in his pride.