A Flight in Spring In the car Lucania from New York to the Pacific coast and back, during April and May, 1898 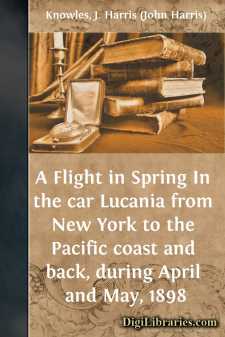 It seemed like a dream to be invited to join a party on a private Pullman car for an extended tour of close on eight thousand miles, all in these our United States! Yet such was the opportunity which was generously offered us in this springtime of 1898.

It was to be "A Flight in Spring" of most intense interest. The journey was to embrace in its continued circuit, from New York back to New York, points as widely separated as New Orleans and San Francisco. It was to traverse many States and Territories, and was to be accomplished with every adjunct of unstinted comfort and refinement.

The expected morning when we were to start on our journey came at last, with that subdued wonder in it that the dream, so unlooked for, was really to be a fact. Bags and satchels were all packed, and with that happy feeling which always comes to the tourist when, all ready, he is safely ensconced in his cab, we sped to the Twenty-third Street ferry for the Pennsylvania depot in Jersey City.

Never did the great Hudson River look so beautiful or New York so magnificent in our eyes as on that early morning of April 13th, when, through and beyond it all, we could see in imagination the great journey before us, all made more radiant by a munificent hospitality which had made it for us a fact—"A Flight in Spring"—which we had often thought of, but never hoped to see.

To start off on such a journey, with a six weeks' vacation in view, even if undertaken all alone and in most prosaic economy, would be an event; but when one was met by pleasant friends and ushered into an independent, self-contained flying home on wheels, it was indeed something ideal.

Our car, the "Lucania," was a happy combination of well-devised space and comfortable arrangement. Let us recount its good points. We may as well begin with the foundation of all well-regulated homes, the kitchen. What a multum in parvo that sacred spot was! It held quite a substantial cooking range; it had lockers and cupboards, and glistening cooking utensils of most approved fashion. Already our chef was at his work, affording, in his own person, with all its good-natured plumpness, a hint of the good things he could evolve from the interesting scene of his labors. He was the best possible specimen of a negro cook, handsome, fat, and jolly. He filled almost completely his little kitchen; his plump and shining cheeks looking like the very best and most exquisitely finished Parisian bronze. Set off by the background of his cooking utensils and other objects of his serious and responsible calling, he presented a picture worthy of a painter. I felt, as I looked at him, that he was a genius in his way. His subsequent work did not belie my instant instinct of his powers; for, on a day long to be remembered, as we were speeding across one of the most arid spots of our journey, somewhere in Arizona, he served up a dinner worthy of a poet; then I felt proud of him. That day the outer air was stifling. Our car was speeding through vast stretches of yellow, heated sand; the sun poured down in full force; every window was closed to keep out, as far as possible, the all-pervading dust. A weary gloom spread over the liveliest of our company, and even dinner was dreaded, as the time approached for that necessary function....