A Feast of Demons 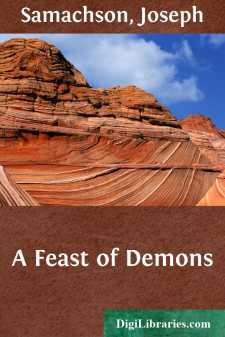 hat year we were all Romans, and I have to tell you that I look awful in a toga and short sword, but not nearly as awful as the Greek.

You go to one of the big schools and naturally you turn out for the Class Reunion. Why not? There's money there, and good fellowship, and money, and the chance of a business contact that will do you some good. And money.

I didn't go to Harvard, Princeton or Yale. I didn't even go to Columbia, U.C.L.A. or the University of Chicago. What I went to was Old Ugly. Don't lie to me—you never heard of Old Ugly, not even if I tell you it's Oglethorpe A. & M. There were fifty-eight of us in my graduating class—that's 1940—and exactly thirty turned up for the tenth reunion.

Wouldn't that turn your stomach? Only thirty Old Grads with enough loyalty and school feeling to show up for that tenth reunion and parade around in Roman togas and drink themselves silly and renew old school ties. And, out of that thirty, the ones that we all really wanted to see for sentimental reasons—I refer to Feinbarger of Feinbarger Shipping, Schroop of the S.S.K. Studios in Hollywood, Dixon of the National City Bank and so on—they didn't show up at all. It was terribly disappointing to all of us, especially to me.

In fact, at the feast that evening, I found myself sitting next to El Greco. There simply wasn't anyone else there. You understand that I don't refer to that Spanish painter—I believe he's dead, as a matter of fact. I mean Theobald Greco, the one we called the Greek.

introduced myself and he looked at me blearily through thick glasses. "Hampstead? Hampstead?"

"Virgil Hampstead," I reminded him. "You remember me. Old Virgie."

He said, "Sure. Any more of that stuff left in the bottle, Old Virgie?"

I poured for him. It was my impression, later borne out by evidence, that he was not accustomed to drinking.

I said, "It's sure great to see all the fellows again, isn't it? Say, look at Pudge Detweiler there! Ever see anything so comical as the lampshade he's wearing for a hat?"

"Just pass me the bottle, will you?" Greco requested. "Old Virgie, I mean."

"Still in research and that sort of thing?" I asked. "You always were a brain, Greek. I can't tell you how much I've envied you creative fellows. I'm in sales myself. Got a little territory right here that's a mint, Greek. A mint. If I only knew where I could lay my hands on a little capital to expand it the way—But I won't bore you with shop talk. What's your line these days?"

"I'm in transmutation," he said clearly, and passed out face down on the table.

Now nobody ever called me a dope—other things, yes, but not a dope.

I knew what transmutation meant. Lead into gold, tin into platinum, all that line of goodies. And accordingly the next morning, after a certain amount of Bromo and black coffee, I asked around the campus and found out that Greco had a place of his own not far from the campus. That explained why he'd turned up for the reunion. I'd been wondering.

I borrowed cab fare from Old Pudge Detweiler and headed for the address I'd been given....