A Fantasy of Mediterranean Travel 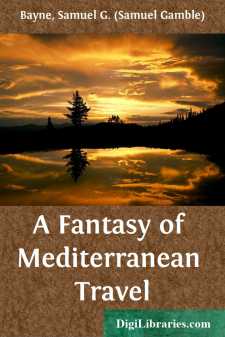 A DREAM OF ANTICIPATION (The spirit of the cruise)

The King of Cork was a funny shipAs ever ploughed the maine:She kep' no log, she went whar she liked;So her Cap'n warn't to blaime.

The Management was funnier still.We always thought it dandy—Till it wrecked us on the Golden Horn,When we meant to land at Kandy.

Fate's relentless finger,Points to the Purser's doom:He gulped the seltzer quickly—Then bust with an air-tight boom!

Taking my cue from this short, spasmodic dream I had one evening in a steamer chair, of what I imagined was to happen on our coming voyage, I started to scribble; and following the fantastic idea in the vision, I shall adopt the abbreviated name of The Cork, for our good ship—although some of the passengers preferred to call her The Corker, as she was big and fine, and justly celebrated among those who go down to the sea in fear and trembling. The fame of this ship and her captain spread so far and wide that a worthy band of male and female pilgrims besought him to take them to foreign parts, for a consideration.

There was great ado at starting, and when we finally steamed out of New York harbor past the "Goddess of Liberty" one fine morning, the air was rent with the screeching of steam sirens and the tooting of whistles. The "Goddess" stood calm and silent on her pedestal; she looked virtuous (which was natural to her, being made of metal), but her stoic indifference was somewhat upset by an icy stalactite that hung from her classic nose. One of the passengers remarked that Bartholdi ought to have supplied her with a handkerchief, but this suggestion was considered flippant by his Philistine audience, and it made no impression whatever.

The list of passengers stood at seven hundred, and an extensive programme of entertainments was promoted for their amusement, consisting of balls, lectures, glees, games of bridge whist and progressive euchre, concerts, readings, and a bewildering schedule of functions, too numerous to mention; in fact, it was a case of three rings under one tent and a dozen side shows.

The passenger list comprised many examples of eccentric characters, rarely found outside of the pages of Dickens; the majority, however, were very interesting and refined people, and the exceptional types only served to accentuate the desirability and variety of their companionship on a voyage of this character. Here is a description of some of them, exaggerated perhaps in places, but not far from the facts when the peculiar conditions surrounding them are fully considered. Many of them were doing their best to attract attention in a harmless way, and in most cases they succeeded, as there is really nothing so immaterial that it escapes all notice from our fellows.

For instance, there was a human skyscraper, a giant, who had an immense pyramid of tousled hair—a Matterhorn of curls and pomatum—who gloried in its possession and scorned to wear hat, bonnet or cap....