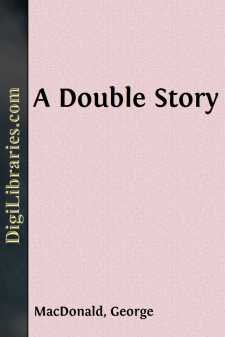 There was a certain country where things used to go rather oddly. For instance, you could never tell whether it was going to rain or hail, or whether or not the milk was going to turn sour. It was impossible to say whether the next baby would be a boy, or a girl, or even, after he was a week old, whether he would wake sweet-tempered or cross.

In strict accordance with the peculiar nature of this country of uncertainties, it came to pass one day, that in the midst of a shower of rain that might well be called golden, seeing the sun, shining as it fell, turned all its drops into molten topazes, and every drop was good for a grain of golden corn, or a yellow cowslip, or a buttercup, or a dandelion at least;—while this splendid rain was falling, I say, with a musical patter upon the great leaves of the horse-chestnuts, which hung like Vandyke collars about the necks of the creamy, red-spotted blossoms, and on the leaves of the sycamores, looking as if they had blood in their veins, and on a multitude of flowers, of which some stood up and boldly held out their cups to catch their share, while others cowered down, laughing, under the soft patting blows of the heavy warm drops;—while this lovely rain was washing all the air clean from the motes, and the bad odors, and the poison-seeds that had escaped from their prisons during the long drought;—while it fell, splashing and sparkling, with a hum, and a rush, and a soft clashing—but stop! I am stealing, I find, and not that only, but with clumsy hands spoiling what I steal:—

"O Rain! with your dull twofold sound,The clash hard by, and the murmur all round:"

—there! take it, Mr. Coleridge;—while, as I was saying, the lovely little rivers whose fountains are the clouds, and which cut their own channels through the air, and make sweet noises rubbing against their banks as they hurry down and down, until at length they are pulled up on a sudden, with a musical plash, in the very heart of an odorous flower, that first gasps and then sighs up a blissful scent, or on the bald head of a stone that never says, Thank you;—while the very sheep felt it blessing them, though it could never reach their skins through the depth of their long wool, and the veriest hedgehog—I mean the one with the longest spikes—came and spiked himself out to impale as many of the drops as he could;—while the rain was thus falling, and the leaves, and the flowers, and the sheep, and the cattle, and the hedgehog, were all busily receiving the golden rain, something happened. It was not a great battle, nor an earthquake, nor a coronation, but something more important than all those put together. A BABY-GIRL WAS BORN; and her father was a king; and her mother was a queen; and her uncles and aunts were princes and princesses; and her first-cousins were dukes and duchesses; and not one of her second-cousins was less than a marquis or marchioness, or of their third-cousins less than an earl or countess: and below a countess they did not care to count. So the little girl was Somebody; and yet for all that, strange to say, the first thing she did was to cry. I told you it was a strange country.

As she grew up, everybody about her did his best to convince her that she was Somebody; and the girl herself was so easily persuaded of it that she quite forgot that anybody had ever told her so, and took it for a fundamental, innate, primary, first-born, self-evident, necessary, and incontrovertible idea and principle that SHE WAS SOMEBODY....