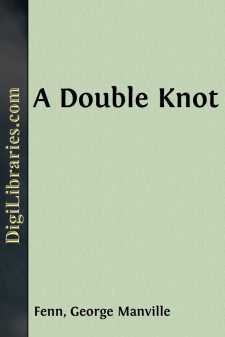 A Daughter of Eve.

There was no reply, and once again rose from the bed in the prettily-furnished room the same word—“Mother!” The wild, appealing, anguished cry of offspring to parent, seeming to ask for help—protection—forgiveness—the tenderness of the mother-heart to its young, and still there was no answer.

The speaker struggled up so that she rested on her elbow, the heavy dark nut-brown hair fell in long clusters on her soft white neck and bosom; her large hazel eyes looked wild and dilated; and her fair young face deathly pale, as, with quivering white lips, she cried once more:

“Mother! Speak to me or I shall die.”

“It would be better so,” was the cold hard reply, and a lady who had been gazing from the window turned slowly round to gaze full at the first speaker, her handsome Spanish type of countenance looking malignant as her dark eyes flashed, where she stood biting her full sensuous nether lip, and glaring at the occupant of the bed.

“Mother!” was the anguished cry once more, as the girl sank back upon her pillow.

“Yes,” was the bitter reply. “You are a mother. God be thanked that your father, who idolised his child, was not spared to see this day.”

“Oh, mother, mother, have some pity—have some mercy upon me. Where am I to seek it, if not from you?”

“From Heaven: for the world will show you none. Why should I? Shame upon you that you should bring this curse upon my widowed life. The coward!—the villain! Was not our simple quiet home, far away from the busy world, to be held sacred, that he must seek us out and cast such a blight upon it!”

“Love him! Idiot! Baby! To be led away by the smooth words of the first soft-spoken villain you meet.”

“You shall not call him villain, mamma,” cried the girl passionately. “He loves me, and I am to be his wife.”

The girl flashed up for a moment with anger, but only to lie back the next instant faint and with half-closed eyes.

“His wife! Are you such a fool that you believe this?” cried the elder woman bitterly. “His wife! There, cast aside that shadow at once, for it is a delusion.”

“No, no, mother, dear mother, he has promised me that I shall be his wife, and I believe him.”

“Yes,” said the mother, “as thousands of daughters of Eve have believed before. There, cast away that thought, poor fool, and think now of hiding your sin from the world which will shun you as if you had the plague.”

“Don’t talk to me!” cried the woman fiercely, and she began to pace the room; tall, swarthy, and handsome for her years, her mobile countenance betraying the workings of the passionate spirit within her.

“Mother! Would I had never been one! My life has been a curse to me.”

“It has, I tell you. There’s something wrong in our blood, I suppose. Look at your brother.”