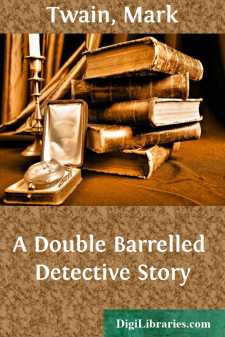 PART I "We ought never to do wrong when people are looking." I

The first scene is in the country, in Virginia; the time, 1880. There has been a wedding, between a handsome young man of slender means and a rich young girl—a case of love at first sight and a precipitate marriage; a marriage bitterly opposed by the girl's widowed father.

Jacob Fuller, the bridegroom, is twenty-six years old, is of an old but unconsidered family which had by compulsion emigrated from Sedgemoor, and for King James's purse's profit, so everybody said—some maliciously the rest merely because they believed it. The bride is nineteen and beautiful. She is intense, high-strung, romantic, immeasurably proud of her Cavalier blood, and passionate in her love for her young husband. For its sake she braved her father's displeasure, endured his reproaches, listened with loyalty unshaken to his warning predictions, and went from his house without his blessing, proud and happy in the proofs she was thus giving of the quality of the affection which had made its home in her heart.

The morning after the marriage there was a sad surprise for her. Her husband put aside her proffered caresses, and said:

"Sit down. I have something to say to you. I loved you. That was before I asked your father to give you to me. His refusal is not my grievance—I could have endured that. But the things he said of me to you—that is a different matter. There—you needn't speak; I know quite well what they were; I got them from authentic sources. Among other things he said that my character was written in my face; that I was treacherous, a dissembler, a coward, and a brute without sense of pity or compassion: the 'Sedgemoor trade-mark,' he called it—and 'white-sleeve badge.' Any other man in my place would have gone to his house and shot him down like a dog. I wanted to do it, and was minded to do it, but a better thought came to me: to put him to shame; to break his heart; to kill him by inches. How to do it? Through my treatment of you, his idol! I would marry you; and then—Have patience. You will see."

From that moment onward, for three months, the young wife suffered all the humiliations, all the insults, all the miseries that the diligent and inventive mind of the husband could contrive, save physical injuries only. Her strong pride stood by her, and she kept the secret of her troubles. Now and then the husband said, "Why don't you go to your father and tell him?" Then he invented new tortures, applied them, and asked again. She always answered, "He shall never know by my mouth," and taunted him with his origin; said she was the lawful slave of a scion of slaves, and must obey, and would—up to that point, but no further; he could kill her if he liked, but he could not break her; it was not in the Sedgemoor breed to do it. At the end of the three months he said, with a dark significance in his manner, "I have tried all things but one"—and waited for her reply. "Try that," she said, and curled her lip in mockery....