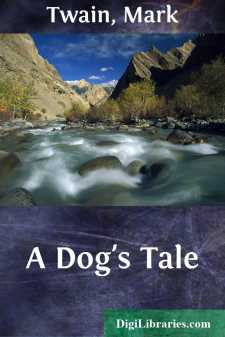 My father was a St. Bernard, my mother was a collie, but I am a Presbyterian. This is what my mother told me, I do not know these nice distinctions myself. To me they are only fine large words meaning nothing. My mother had a fondness for such; she liked to say them, and see other dogs look surprised and envious, as wondering how she got so much education. But, indeed, it was not real education; it was only show: she got the words by listening in the dining-room and drawing-room when there was company, and by going with the children to Sunday-school and listening there; and whenever she heard a large word she said it over to herself many times, and so was able to keep it until there was a dogmatic gathering in the neighborhood, then she would get it off, and surprise and distress them all, from pocket-pup to mastiff, which rewarded her for all her trouble. If there was a stranger he was nearly sure to be suspicious, and when he got his breath again he would ask her what it meant. And she always told him. He was never expecting this but thought he would catch her; so when she told him, he was the one that looked ashamed, whereas he had thought it was going to be she. The others were always waiting for this, and glad of it and proud of her, for they knew what was going to happen, because they had had experience. When she told the meaning of a big word they were all so taken up with admiration that it never occurred to any dog to doubt if it was the right one; and that was natural, because, for one thing, she answered up so promptly that it seemed like a dictionary speaking, and for another thing, where could they find out whether it was right or not? for she was the only cultivated dog there was. By and by, when I was older, she brought home the word Unintellectual, one time, and worked it pretty hard all the week at different gatherings, making much unhappiness and despondency; and it was at this time that I noticed that during that week she was asked for the meaning at eight different assemblages, and flashed out a fresh definition every time, which showed me that she had more presence of mind than culture, though I said nothing, of course. She had one word which she always kept on hand, and ready, like a life-preserver, a kind of emergency word to strap on when she was likely to get washed overboard in a sudden way—that was the word Synonymous. When she happened to fetch out a long word which had had its day weeks before and its prepared meanings gone to her dump-pile, if there was a stranger there of course it knocked him groggy for a couple of minutes, then he would come to, and by that time she would be away down wind on another tack, and not expecting anything; so when he'd hail and ask her to cash in, I (the only dog on the inside of her game) could see her canvas flicker a moment—but only just a moment—then it would belly out taut and full, and she would say, as calm as a summer's day, "It's synonymous with supererogation," or some godless long reptile of a word like that, and go placidly about and skim away on the next tack, perfectly comfortable, you know, and leave that stranger looking profane and embarrassed, and the initiated slatting the floor with their tails in unison and their faces transfigured with a holy joy.

And it was the same with phrases. She would drag home a whole phrase, if it had a grand sound, and play it six nights and two matinees, and explain it a new way every time—which she had to, for all she cared for was the phrase; she wasn't interested in what it meant, and knew those dogs hadn't wit enough to catch her, anyway. Yes, she was a daisy! She got so she wasn't afraid of anything, she had such confidence in the ignorance of those creatures. She even brought anecdotes that she had heard the family and the dinner-guests laugh and shout over; and as a rule she got the nub of one chestnut hitched onto another chestnut, where, of course, it didn't fit and hadn't any point; and when she delivered the nub she fell over and rolled on the floor and laughed and barked in the most insane way, while I could see that she was wondering to herself why it didn't seem as funny as it did when she first heard it. But no harm was done; the others rolled and barked too, privately ashamed of themselves for not seeing the point, and never suspecting that the fault was not with them and there wasn't any to see.

You can see by these things that she was of a rather vain and frivolous character; still, she had virtues, and enough to make up, I think. She had a kind heart and gentle ways, and never harbored resentments for injuries done her, but put them easily out of her mind and forgot them; and she taught her children her kindly way, and from her we learned also to be brave and prompt in time of danger, and not to run away, but face the peril that threatened friend or stranger, and help him the best we could without stopping to think what the cost might be to us. And she taught us not by words only, but by example, and that is the best way and the surest and the most lasting. Why, the brave things she did, the splendid things! she was just a soldier; and so modest about it—well, you couldn't help admiring her, and you couldn't help imitating her; not even a King Charles spaniel could remain entirely despicable in her society. So, as you see, there was more to her than her education.

When I was well grown, at last, I was sold and taken away, and I never saw her again. She was broken-hearted, and so was I, and we cried; but she comforted me as well as she could, and said we were sent into this world for a wise and good purpose, and must do our duties without repining, take our life as we might find it, live it for the best good of others, and never mind about the results; they were not our affair. She said men who did like this would have a noble and beautiful reward by and by in another world, and although we animals would not go there, to do well and right without reward would give to our brief lives a worthiness and dignity which in itself would be a reward. She had gathered these things from time to time when she had gone to the Sunday-school with the children, and had laid them up in her memory more carefully than she had done with those other words and phrases; and she had studied them deeply, for her good and ours....