A District Messenger Boy and a Necktie Party 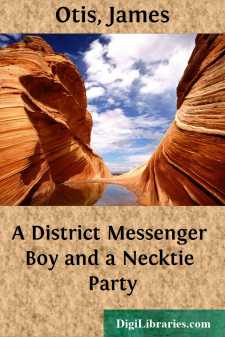 " Very well, now listen to what I say, and see that you do exactly as I tell you. I am going to Providence by the Sound steamer that sails in an hour and a half; take these tickets, go to the office of the boat, get the key of the stateroom I have engaged and paid for, and put these satchels in it."

"Then wait near the gangway of the steamer until I come, for I shall probably be late, as I have to take a sick friend with me. Be sure to have the room ready, so that I can have him carried directly from the carriage to his berth."

"For an hour and a half, ninety cents, sir, and car fare extra if you want me to get there in a hurry."

" Very well, here is a dollar, and see that you do exactly as I have told you."

Joe touched his cap, took the two valises that the gentleman pointed out to him in one corner of the office, and, staggering under the heavy weight, started for the nearest elevated railroad station. Joe was scarcely large enough to carry the valises; but, when he succeeded in getting a situation in the messenger service, he knew that he would have plenty of hard work to do, and was fully prepared for it. .Besides, this acting the part of porter was by no means so difficult a job as some that had been assigned to him in the past six weeks, and he went about it as philosophically as if he had been a man, instead of a boy only twelve years old.

Arrived at the dock, he had no trouble in getting the stateroom key, since he had the proper tickets, and, after caring for the baggage, it was only necessary to wait near the gang-plank until his employer should appear.

It was by no means hard work for Joe to wait for the gentleman; in the bustle and confusion everywhere around him he found plenty to occupy his mind, and, forgetting how hard he had. struggled to get the baggage down there, he thought he had been particularly fortunate in being assigned to the work.

The moments went by so fast that, when the last bell sounded, and Joe heard the cry of "All ashore that's going," he could hardly believe it possible that he had been on the boat more than an hour, waiting for the gentleman and his sick friend.

" He's got to come pretty soon, or else his stateroom won't do him much good," Joe said to himself as he stood close by the gang-plank with the key in his hand, ready to deliver it without delay.

But although carriage after carriage was driven up just in time for its occupants to get on the boat, Joe's employer did not come, and the boy began to understand that, unless he made some decided move at once, he would be carried away.

"He told me to look out for the baggage until he came; but I don't s'pose he meant for me to go to Providence if he didn't come."

The sailors were pulling the gang-plank ashore, and Joe saw that his time was indeed limited. Since he had been ordered to care for the baggage until the gentleman came, he had no idea of leaving it on the steamer, neither did he propose to make a trip to Providence....