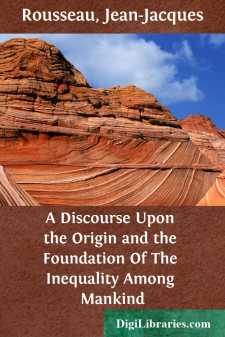 'Tis of man I am to speak; and the very question, in answer to which I am to speak of him, sufficiently informs me that I am going to speak to men; for to those alone, who are not afraid of honouring truth, it belongs to propose discussions of this kind. I shall therefore maintain with confidence the cause of mankind before the sages, who invite me to stand up in its defence; and I shall think myself happy, if I can but behave in a manner not unworthy of my subject and of my judges.

I conceive two species of inequality among men; one which I call natural, or physical inequality, because it is established by nature, and consists in the difference of age, health, bodily strength, and the qualities of the mind, or of the soul; the other which may be termed moral, or political inequality, because it depends on a kind of convention, and is established, or at least authorized, by the common consent of mankind. This species of inequality consists in the different privileges, which some men enjoy, to the prejudice of others, such as that of being richer, more honoured, more powerful, and even that of exacting obedience from them.

It were absurd to ask, what is the cause of natural inequality, seeing the bare definition of natural inequality answers the question: it would be more absurd still to enquire, if there might not be some essential connection between the two species of inequality, as it would be asking, in other words, if those who command are necessarily better men than those who obey; and if strength of body or of mind, wisdom or virtue are always to be found in individuals, in the same proportion with power, or riches: a question, fit perhaps to be discussed by slaves in the hearing of their masters, but unbecoming free and reasonable beings in quest of truth.

What therefore is precisely the subject of this discourse? It is to point out, in the progress of things, that moment, when, right taking place of violence, nature became subject to law; to display that chain of surprising events, in consequence of which the strong submitted to serve the weak, and the people to purchase imaginary ease, at the expense of real happiness.

The philosophers, who have examined the foundations of society, have, every one of them, perceived the necessity of tracing it back to a state of nature, but not one of them has ever arrived there. Some of them have not scrupled to attribute to man in that state the ideas of justice and injustice, without troubling their heads to prove, that he really must have had such ideas, or even that such ideas were useful to him: others have spoken of the natural right of every man to keep what belongs to him, without letting us know what they meant by the word belong; others, without further ceremony ascribing to the strongest an authority over the weakest, have immediately struck out government, without thinking of the time requisite for men to form any notion of the things signified by the words authority and government. All of them, in fine, constantly harping on wants, avidity, oppression, desires and pride, have transferred to the state of nature ideas picked up in the bosom of society....