A Discourse on the Plague 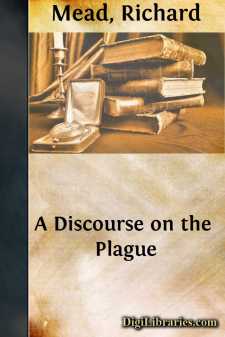 This Book having at first been written only as a Plan of Directions for preserving our Country from the Plague was then very short and concise. An Act of Parliament being immediately after made for performing Quarantaines &c. according to the Rules here laid down, it passed through seven Editions in one year without any Alterations. I then thought proper to make some Additions to it, in order to shew the Reasonableness of the Methods prescribed, by giving a more full Description of this Disease, and collecting some Examples of the good Success which had attended such Measures, when they had been put in Practice. At the same time I annex’d a short Chapter relating to the Cure of the Plague; being induced thereto by considering how widely most Authors have erred in prescribing a Heap of useless and very often hurtful Medicines, which they recommend under the specious Titles of Antidotes, Specifics and Alexipharmacs: hoping that the great Resemblance, which I had observed between this Disease and the Small Pox, would justify my writing upon a Distemper which I have never seen.

INDEED the Small Pox is a true Plague, tho’ of a particular kind, bred, as I have shewn all Pestilences are, in the same hot Egyptian Climate, and brought into Asia and Europe by the way of Commerce; but most remarkably by the War with the Saracens, called the Holy War, at the latter end of the eleventh and the beginning of the twelfth Century. Ever since which time the morbific Seeds of it have been preserved in the infected Cloaths and the Furniture of Houses: and have broken out more or less in all Countries, according as the hot and moist Temperature of the Air has favoured their Spreading and the Exertion of their Force. The Measles is likewise a Plague sui generis, and owes its Origin to the same Country.

I have now revised my little Work once more: and though I cannot find any reason to change my Mind as to any material Points which regard either the Preventing or the Stopping the Progress of Infection; yet I have here and there added some new Strokes of Reasoning, and, as the Painters say, retouch’d the Ornaments, and hightened the Colouring of the Piece.

THE Substance of the long Preface to the last Edition is as follows.

I have insisted more at large upon the Infection of this Disease, than I could ever have thought needful at this time, after Europe has had Experience of the Distemper for so many Ages; had I not been surprized by the late Attempts of some Physicians in France to prove the contrary, even while they have the most undeniable Arguments against them before their Eyes. In particular, I cannot but very much admire to see Dr. Chicoyneau, and the other Physicians, who first gave us Observations on the Plague, when at Marseilles, relate in the Reflections, they afterwards published upon those Observations, the Case of a Man, who was seized with the Plague, upon his burying a young Woman dead of it, when no one else dared to approach the Body; and yet to see them ascribe his Disease, not to his being infected by the Woman, but solely to his Grief for the Loss of her, to whom he had made Love, and to a Diarrhœa, which had been some time upon him....