A Discourse on the Life, Character and Writings of Gulian Crommelin Verplanck 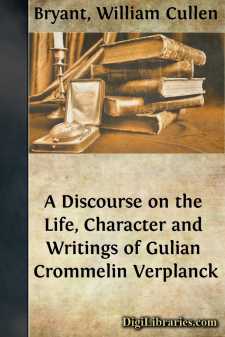 Officers of the Society,Elected January, 1870.

The life of him in honor of whose memory we are assembled, was prolonged to so late a period and to the last was so full of usefulness, that it almost seemed a permanent part of the organization and the active movement of society here. His departure has left a sad vacuity in the framework which he helped to uphold and adorn. It is as if one of the columns which support a massive building had been suddenly taken away; the sight of the space which it once occupied troubles us, and the mind wearies itself in the unavailing wish to restore it to its place.

In what I am about to say, I shall put together some notices of the character, the writings, and the services of this eminent man, but the portraiture which I shall draw will be but a miniature. To do it full justice a larger canvas would be required than the one I propose to take. He acted in so many important capacities; he was connected in so many ways with our literature, our legislation, our jurisprudence, our public education, and public charities, that it would require a volume adequately to set forth the obligations we owe to the exertion of his fine faculties for the general good.

Gulian Crommelin Verplanck was born in Wall street, in the city of New York, on the 6th of August, 1786. The house in which he was born was a large yellow mansion, standing on the spot on which the Assay Office has since been built. A little beyond this street, a few rods only, lay the island of New York in all its original beauty, so that it was but a step from Wall street to the country. His father, Daniel Crommelin Verplanck, was a respectable citizen of the old stock of colonists from Holland, who for several terms was a member of Congress, and whom I remember as a short, stout old gentleman, commonly called Judge Verplanck, from having been in the latter years of his life a Judge of the County Court of Dutchess. Here he resided in the latter years of his life on the patrimonial estate, where the son, ever since I knew him, was always in the habit of passing a part of the summer. It had been in the family of the Verplancks ever since their ancestor Gulian Verplanck with Francis Rombout, in 1683, purchased it, with other lands, of the Wappinger Indians for a certain amount of money and merchandize, specified in a deed signed by the Sachem Sakoraghuck and other chiefs, the spelling of whose names seems to defy pronunciation. The two purchasers afterwards divided this domain, and to the Verplancks was assigned a tract which they have ever since held.

This fine old estate has a long western border on the Hudson, and extends easterly for four or five miles to the village of Fishkill....