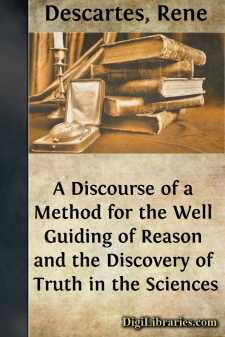 Right understanding is the most equally divided thing in the World; for every one beleevs himself so well stor’d with it, that even those who in all other things are the hardest to be pleas’d, seldom desire more of it then they have; wherein it is not likely that all Men are deceived: But it rather witnesseth, That the faculty of right-judging and distinguishing truth from falshood (which is properly call’d, Understanding or Reason) is naturally equal in all Men. And as the diversity of our Opinions, is not, because some are more reasonable then others; but only that we direct our thoughts several ways, neither do we consider the same things. For ’tis not enough to have good faculties, but the principal is, to apply them well. The greatest Souls are as capable of the greatest Vices, as of the most eminent Vertues: And those who move but very slowly, may advance much farther, if they always follow the right way; then those who run and straggle from it.

For my part, I never presum’d that my Minde was more perfect in any thing then an ordinary Mans; nay, I have often wish’d to have had my thoughts as quick, my imagination as clear and distinct, and my memory as large and as ready as some other Men have had. And I know no Qualities which serve more then those to the perfection of the Minde; for as for Reason or Understanding, forasmuch as it is the only thing which makes us Men, and distinguisheth us from beasts, I will beleeve it to be entire in every One, and follow herein the common opinion of the Philosophers, who say, That there is only more or less among the Accidents, and not amongst the Forms or nature of the Individuals of one species.

But I shall not stick to say, That I beleeve my self very happy, in having encountred from my youth with certain ways which have led me to considerations and Maximes, from which I have found a Method; whereby methinks, I have the means by degrees to augment my knowledg, and by little and little to raise it up to the highest pitch, whereto the meaness of my capacity, & the short course of my life can permit it to attain. For I have already reaped such fruits from it, that although in the judgment I make of my self, I endevour always rather to incline to mistrust, then to presumption. And looking on the divers actions and undertakings of all Men, with the eye of a Philosopher, there is almost none which to me seems not vain and useless. Yet I am extremely satisfied with the Progress, which (as it seems to me) I have already made in the search of Truth, and do conceive such hopes for the future, That if among the employments of Men, purely Men, there is any solidly good, and of importance, I dare beleeve it is that which I have chosen: Yet it may be that I deceive my self, and perhaps it is but a little Copper and Glass which I take for Gold and Diamonds. I know how subject we are to mistake in those things which concern us, and how jealous we ought to be of the judgment of our friends, when it is in our favor. But I should willingly in this Discourse, trace out unto you the ways which I have followed, and represent therein my life, as in a Picture, to the end, that every one may judge thereof; and that learning from common Fame, what mens opinions are of it, I may finde a new means of instructing my self; which I shall add to those which I customarily make use of....