A Discourse for the Time, delivered January 4, 1852 in the First Congregational Unitarian Church 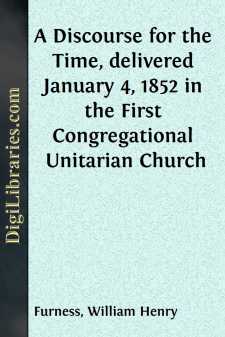 In speaking from these words last Sunday morning, and in endeavoring to enforce the great truth which they express, I began with referring to certain facts which characterize that most brutal and ruthless military revolution which has just commenced in France, and the recent news of which made every heart, that cherishes any regard for Freedom and Humanity, burn with indignation. The first statements to which I alluded have been more than confirmed. Unarmed, unoffending citizens, utterly ignorant of what was going on, and taking no part in it, were shot down by hundreds in the streets, and then transfixed with bayonets. If but a window was opened, a shower of bullets was poured into it. Cannon were brought to bear upon whole blocks of private dwellings. In one instance, a woman who rushed out of the house to the help of her husband, who had fallen under the fire of the soldiery, was instantly despatched and laid dead at his side. Bloodshed and terror filled the place, and scenes were enacted, so eyewitnesses report, that baffle description, and that can find a parallel only when cities are sacked.

Now, I refer to these facts, not to harrow up your feelings, my hearers, but because these facts, and such as these, speak trumpet-tongued, as to the vital interest and the sacred religious duty which every private man, no matter how humble and obscure,—nay, which every woman has, in those great questions that agitate nations, in what are designated as matters of public concern and the public welfare.

I know very well that there are those who deplore it, and consider it a great grievance, that here, in this country, there is so much agitation of public matters in private circles, and by private, unofficial persons. To be sure, one would like to have quiet, if he could. But there is no help for it. We must take our lot as we find it. And such is the nature of our social fabric; drawing all the power of the government from the people, from the individuals that compose the people, that it is made the direct and plain duty of every man and woman of us to know about those things, which are public, for this very reason, because they concern the many,—the high and the low, the rich and the poor, the security, the happiness, the improvement, the civil and the religious liberties of every man in the land. A necessity is upon us; and if we have been accustomed to confine our ideas of duty and religion to the Church and the Sabbath, the sooner we get our minds sufficiently enlarged to see the religious obligation which binds us to the great Public of mankind, the better for us, for our neighbors, and for all men.

So, then, the fact that private men are interested in public affairs, even though it be attended with a good deal of excitement,—that is not the thing to be deplored. But what is to be lamented is, that false way of thinking, out of place in this country, out of time in this age, by which thousands justify themselves in continuing ignorant and indifferent to things of a vital private concern, simply because they are of a public and general character. What is more common than to hear men say, in reference to such matters, 'They are no concerns of ours. We care nothing about them. Let those busy themselves about them who are so disposed. As for us, we are not going to perplex our brains, and fret and worry ourselves. We will mind our own business.' And, in the proud consciousness of this virtuous resolution, they wrap themselves up in their comforts, and keep aloof and indifferent, and flatter themselves that they are the wise and the prudent, they are the enlightened, judicious ones. They are no meddlers. They do not trouble themselves about what does not concern them.