A Diary Without Dates 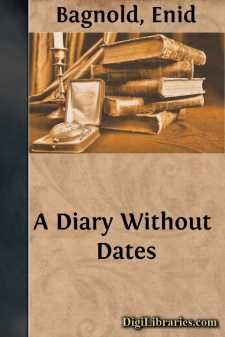 OUTSIDE THE GLASS DOORS

I like discipline. I like to be part of an institution. It gives one more liberty than is possible among three or four observant friends.

It is always cool and wonderful after the monotone of the dim hospital, its half-lit corridors stretching as far as one can see, to come out into the dazzling starlight and climb the hill, up into the trees and shrubberies here.

The wind was terrible to-night. I had to battle up, and the leaves were driven down the hill so fast that once I thought it was a motor-bicycle.

Madeleine's garden next door is all deserted now: they have gone up to London. The green asphalt tennis-court is shining with rain, the blue pond brown with slime; the little statues and bowls are lying on their sides to keep the wind from putting them forcibly there; and all over the house are white draperies and ghost chairs.

When I walk in the garden I feel like a ghost left over from the summer too.

I became aware to-night of one face detaching itself from the rest. It is not a more pleasing face than the others, but it is becoming conspicuous to me.

Twice a week, when there is a concert in the big hall, the officers and the V.A.D.'s are divided, by some unspoken rule—the officers sitting at one side of the room, the V.A.D.'s in a white row on the other.

When my eyes rest for a moment on the motley of dressing-gowns, mackintoshes, uniforms, I inevitably see in the line one face set on a slant, one pair of eyes forsaking the stage and fixed on me in a steady, inoffensive beam.

Afterwards in the dining-room during Mess he will ask politely: "What did you think of the concert, Sister? Good show...."

How wonderful to be called Sister! Every time the uncommon name is used towards me I feel the glow of an implied relationship, something which links me to the speaker.

My Sister remarked: "If it's only a matter of that, we can provide thrills for you here very easily."

The name of my ... admirer ... is, after all, Pettitt. The other nurse in the Mess, who is very grand and insists on pronouncing his name in the French way, says he is "of humble origin."

He seems to have no relations and no visitors.

Out in the corridor I meditate on love.

Laying trays soothes the activity of the body, and the mind works softly.

I meditate on love. I say to myself that Mr. Pettitt is to be envied. I am still the wonder of the unknown to him: I exist, walk, talk, every day beneath the beam of his eye, impenetrable.

He fell down again yesterday, and his foot won't heal. He has time before him.

But in a hospital one has never time, one is never sure. He has perhaps been here long enough to learn that—to feel the insecurity, the impermanency.

At any moment he may be forced to disappear into the secondary stage of convalescent homes.

Yes, the impermanency of life in a hospital! An everlasting dislocation of combinations.

Like nuns, one must learn to do with no nearer friend than God....