A Dialogue Between Dean Swift and Tho. Prior, Esq. In the Isles of St. Patrick's Church, Dublin, On that Memorable Day, October 9th, 1753 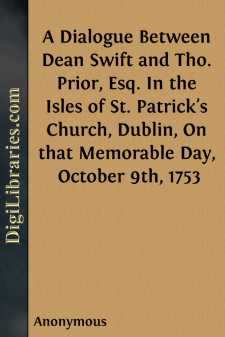 Prior. Mr. Dean, I am sorry to see you up, if any of your private Affairs disturb you. I came to call at your Grave, and have a little Discourse with you; but unless 'tis the Publick has rouz'd you, I am troubled to find you walking as well as my self.

Swift. 'Tis my Country keeps me walking! why who can lie still? I don't believe there are many Ghosts now, that have any share of Understanding, or any regard for Ireland, that are to be found in their Graves at Midnight. For my part I can no more keep in my Den than if it were the Day of Judgment. I have been earth'd now eight Years last October, and I think on my Conscience (and you know Tom the Conscience of one dead Man is worth ten of those that are living) I have had very few good Days Sleep since I got there. Ah Tom! poor Ireland! poor Ireland! it plagued my Heart while I was trifling away Life there; but my Curse on it, I never thought it would have broke my Rest thus when I was dead. I have tumbled and toss'd from one Side to the other (and by the by, they make these cursed Coffins so narrow 'tis a Plague to be in them) first one Thing would come into my Head, and then another, and often wrought me so, that I have many a time been forced to walk a whole Moon to rest me and get the better Nap when I lay down. Prithee how have you done?

Prior. Why, very little better; only as I have not been so long shut up in my Dormitory as you, the Confinement is less irksome. But I was not affected the same way with you, for I sometimes slept for Months together like a Dormouse; but when Ireland once gets into my Head and its present melancholy Circumstances, it works my Thoughts upwards and downwards from the Great Ones to their Slaves, like a poor Patient with Ward's Drop and Pill.

Swift. That has often been my Case Tom. When I get into that Train of thinking, and consider the present Situation of our Country, it makes me as uneasy in my Coffin as a Rat shut up in a Trap. I remember an old She Fool, that was fonder of scribling than reigning, used to say, that the Dead have that melancholy Advantage over the Living of first forgetting them; but 'tis as false as ten thousand other Truths, that your Philosophers and Politicians above Ground keep such a babling with over our Heads. For my part I never had that Pleasure, for since my first Nap under my Gravestone, which did not last three Weeks, I have been as much perplex'd about Ireland, as if I was still living at the Deanry, writing for Posterity, and thinking for my poor Country. What makes you sigh so Tom? Why you draw your Breath as hard as a broken-winded Racer; some Qualm I suppose about this neglected Island.

Prior. That was the Case indeed. But tho' I am chiefly grieved at the ill Circumstances of I——d, my next trouble is, that the World seems resolved they shall never mend; and, I think so, by their treating all true Patriots in the most unhandsome Manner. This is as mad a Measure, as imprisoning the Physicians in an epidemical Sickness would be. Yet such Men, who only could heal our Distempers, are treated almost as common Poisoners, and watch'd as if they were Incendiaries and the Enemies of Society. It was too much our own Case when we were among Men, and tho' I scorn to lament the indifferent Treatment Dean Swift and Tom Prior received from those who should have respected and honoured them; yet I cannot help being concerned for the hard Usage all true Patriots generally meet with in I——d....