A Desert Drama Being The Tragedy Of The "Korosko" 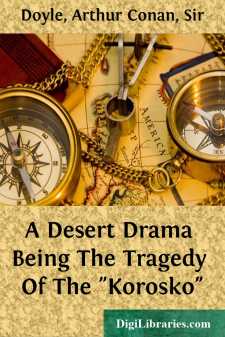 The public may possibly wonder why it is that they have never heard in the papers of the fate of the passengers of the __Korosko__. In these days of universal press agencies, responsive to the slightest stimulus, it may well seem incredible that an international incident of such importance should remain so long unchronicled. Suffice it that there were very valid reasons, both of a personal and political nature, for holding it back. The facts were well known to a good number of people at the time, and some version of them did actually appear in a provincial paper, but was generally discredited They have now been thrown into narrative form, the incidents having been collated from the sworn statements of Colonel Cochrane Cochrane, of the Army and Navy Club, and from the letters of Miss Adams, of Boston, Mass. These have been supplemented by the evidence of Captain Archer, of the Egyptian Camel Corps, as given before the secret Government inquiry at Cairo. Mr. James Stephens has refused to put his version of the matter into writing, but as these proofs have been submitted to him, and no correction or deletion has been made in them, it may be supposed that he has not succeeded in detecting any grave misstatement of fact, and that any objection which he may have to their publication depends rather upon private and personal scruples.

The __Korosko__, a turtle-bottomed, round-bowed stern-wheeler, with a 30-inch draught and the lines of a flat-iron, started upon the 13th of February, in the year 1895, from Shellal, at the head of the first cataract, bound for Wady Haifa. I have a passenger card for the trip, which I hereby produce:

This was the party as it started from Shellal with the intention of travelling up the two hundred miles of Nubian Nile which lie between the first and the second cataract.

It is a singular country, this Nubia. Varying in breadth from a few miles to as many yards (for the name is only applied to the narrow portion which is capable of cultivation), it extends in a thin, green, palm-fringed strip upon either side of the broad coffee-coloured river. Beyond it there stretches on the Libyan bank a savage and illimitable desert, extending to the whole breadth of Africa. On the other side an equally desolate wilderness is bounded only by the distant Red Sea. Between these two huge and barren expanses Nubia writhes like a green sandworm along the course of the river. Here and there it disappears altogether, and the Nile runs between black and sun-cracked hills, with the orange drift-sand lying like glaciers in their valleys. Everywhere one sees traces of vanished races and submerged civilisations. Grotesque graves dot the hills or stand up against the sky-line: pyramidal graves, tumulus graves, rock graves,—everywhere, graves....