A Defence of the Hessians 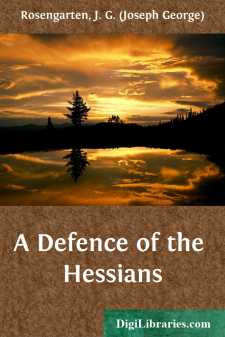 The Seven Years’ War had enlisted England’s rich help in men and money. A powerful army of one hundred thousand men, composed of English soldiers, of twenty-four thousand Hessians, of Hanoverians and Brunswickers, enabled Frederick of Prussia to continue a resistance which otherwise he could not have maintained for two years. The North German states were not Prussian vassals, but allies of England for a hundred years, on the basis of common political aims. Hesse, as the stronghold of the Protestants of North Germany, had been in close alliance with England at a time when Brandenburg was little thought of. The ancient military glory of Hesse during the Thirty Years’ War was so great that Gustavus Adolphus on landing in Germany had asked for a Hessian, Colonel Falkenburg, as military governor of Magdeburg. For a century and a half Hessian soldiers fought shoulder to shoulder with the English troops, mainly against France. That they should again act together in America was not more surprising than that the Sardinian Italians should coöperate with the French in the Crimea. The same statesmanlike wisdom was shown in Cassel and in Turin, and led to a like result. The little Hesse of 1866 must not be confused with the old Hesse, which was an important factor in German politics. In almost every war of the last century Hesse had taken part with its army of twenty-four thousand men,—an important contingent at that time and one that made Hesse the object of many invitations to close alliance. In the Seven Years’ War, England joined Frederick the Great, so, too, did the Hessians and the other German allies. It fared badly with Hesse,—repeatedly it was overrun and often held by the French, while its army was serving in Westphalia and Hanover; the Elector died away from his home and was succeeded by his son; none of the eastern provinces of Prussia suffered like Hesse.

The Elector Frederick had been educated on the Rhine, and shortly before the outbreak of the Seven Years’ War was the guest of the Archbishop Elector of Cologne. Political honors have been made the reason of the Elector of Saxony’s change of his Protestant faith—that he might secure the throne of Catholic Poland. Vanity and want of patriotic pride have led German princesses to win Russian husbands at the sacrifice of their Protestant faith, while no Russian princess has ever given up her church for the sake of a foreign husband. Frederick of Hesse changed his religion from purely personal reasons and in perfect honesty. It was long concealed from his father, a strong Protestant, ruling the church in the spirit of his ancestor Maurice. An accident revealed the secret, and violent was the anger of the sturdy Protestant father. At first he wanted to exclude his son from the succession, but this required an appeal to the Emperor, who naturally would refuse. The elder prince then, with the approval of his Parliament, made a close alliance with England, and this added to the security of his son’s English marriage. The eldest son of that marriage, later on Elector William, was to rule in Hanau, free from any influence of his Catholic father, under the protection of an English garrison, so that his home was temporarily separated from Hesse, and put under strict protection of its church rights. Parliament, people, and army all took an oath to abide by this, and Elector Frederick always kept his Catholic predilections strictly personal, never influencing the old Protestant rule; indeed, out of his own purse he completed the Reformed church in Cassel begun by his father, and endowed it.

In 1762 Elector Frederick returned home at the head of the Hessian army, and Hessian administration replaced that of the foreign invaders; but the treasury was empty, the resources of the state exhausted, and the population reduced one-half. The country had been laid waste. The Elector declined all show, and quietly reoccupied his ancestral castle on January 2, 1763. The Parliament was summoned, and again exercised its constitutional rights to examine and criticise the financial statements of the government. These showed that the only resource for the needs of the army was the claim against England for unpaid subsidies, amounting to 10,143,286 thalers. The government was authorized to reduce the army and to apply any saving thus effected for pressing civil needs. The representative in London was instructed to urge the prompt payment of the debt due for Hessian forces in English service. The matter was warmly discussed in Parliament, and only in 1775 was the debt discharged in part to the amount of 7,923,283 thalers. In 1772 a short supply of food led to the establishment of public warehouses, where flour bought abroad was sold at cost price.

The agricultural condition, however, was a very unfavorable one, and in 1775 England first broached a renewal of the old alliance, with a view to the employment of Hessian troops in the case of war in America....