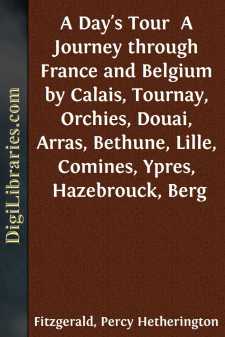 t is London, of a bright sultry August day, when the flags seem scorching to the feet, and the sun beats down fiercely. It has yet a certain inviting attraction. There is a general air of bustle, and the provincial, trundled along in his cab, his trunks over his head, looks out with a certain awe and sense of delight, noting, as he skirts the Park, the gay colours glistening among the dusty trees, the figures flitting past, the riders, the carriages, all suggesting a foreign capital. The great city never looks so brilliant or so stately as on one of these 'broiling' days. One calls up with a sort of wistfulness the great and picturesque cities abroad, with their grand streets and palaces, ever a delightful novelty. We long to be away, to be crossing over that night—enjoying a cool fresh passage, all troubles and monotony left behind.

On one such day this year—a Wednesday—these mixed impressions and longings presented themselves with unwonted force and iteration. So wistful and sudden a craving for snapping all ties and hurrying away was after all spasmodic, perhaps whimsical; but it was quickened by that sultry, melting air of the parks and the tropical look of the streets. The pavements seemed to glare fiercely like furnaces; there was an air of languid Eastern enjoyment. The very dogs 'snoozed' pleasantly in shady corners, and all seemed happy as if enjoying a holiday.

How delightful and enviable those families—the father, mother, and fair daughters, now setting off gaily with their huge boxes—who to-morrow would be beside the ever-delightful Rhine, posting on to Cologne and Coblentz. What a welcome ring in those names! Stale, hackneyed as it is, there comes a thrill as we get the first glimpse of the silvery placid waters and their majestic windings. Even the hotels, the bustle, and the people, holiday and festive, all seem novel and gay. With some people this fairy look of things foreign never 'stales,' even with repetition. It is as with the illusions of the stage, which in some natures will triumph over the rudest, coarsest shocks.

Well, that sweltering day stole by. The very cabmen on their 'stands' nodded in blissful dreams. The motley colours in the Park—a stray cardinal-coloured parasol or two added to the effect—glinted behind the trees. The image of the happy tourists in the foreign streets grew more vivid. The restlessness increased every hour, and was not to be 'laid.'

Living within a stone's-throw of Victoria Station, I find a strange and ever new sensation in seeing the night express and its passengers starting for foreign lands—some wistful and anxious, others supremely happy. It is next in interest to the play. The carriages are marked 'Calais,' 'Paris,' etc. It is even curious to think that, within three hours or so, they will be on foreign soil, among the French spires, sabots, blouses, gendarmes, etc. These are trivial and fanciful notions, but help to fortify what one has of the little faiths of life, and what one wise man, at least, has said: that it is the smaller unpretending things of life that make up its pleasures, particularly those that come unexpectedly, and from which we hope but little....