A Day's Ride A Life's Romance 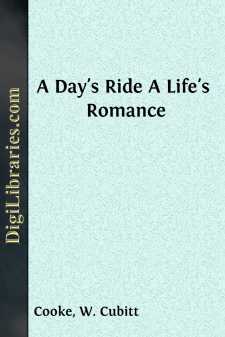 CHAPTER I. I PREPARE TO SEEK ADVENTURES

It has been said that any man, no matter how small and insignificant the post he may have filled in life, who will faithfully record the events in which he has borne a share, even though incapable of himself deriving profit from the lessons he has learned, may still be of use to others,—sometimes a guide, sometimes a warning. I hope this is true. I like to think it so, for I like to think that even I,—A. S. P.,—if I cannot adorn a tale, may at least point a moral.

Certain families are remarkable for the way in which peculiar gifts have been transmitted for ages. Some have been great in arms, some in letters, some in statecraft, displaying in successive generations the same high qualities which had won their first renown. In an humble fashion, I may lay claim to belong to this category. My ancestors have been apothecaries for one hundred and forty-odd years. Joseph Potts, "drug and condiment man," lived in the reign of Queen Anne, at Lower Liffey Street, No. 87; and to be remembered passingly, has the name of Mr. Addison amongst his clients,—the illustrious writer having, as it would appear, a peculiar fondness for "Pott's linature," whatever that may have been; for the secret died out with my distinguished forefather. There was Michael Joseph Potts, "licensed for chemicals," in Mary's Abbey, about thirty years later; and so we come on to Paul Potts and Son, and then to Launcelot Peter Potts, "Pharmaceutical Chemist to his Excellency and the Irish Court," the father of him who now bespeaks your indulgence.

My father's great misfortune in life was the ambition to rise above the class his family had adorned for ages. He had, as he averred, a soul above senna, and a destiny higher than black drop. He had heard of a tailor's apprentice becoming a great general. He had himself seen a wig-maker elevated to the woolsack; and he kept continually repeating, "Mine is the only walk in life that leads to no high rewards. What matters it whether my mixtures be addressed to the refined organization of rank, or the dura ilia rasorum?—I shall live and die an apothecary. From every class are men selected for honors save mine; and though it should rain baronetcies, the bloody hand would never fall to the lot of a compounding chemist."

"What do you intend to make of Algernon Sydney, Mr. Potts?" would say one of his neighbors. "Bring him up to your own business? A first-rate connection to start with in life."

"My own business, sir? I'd rather see him a chimneysweep."

"But, after all, Mr. Potts, being so to say, at the head of your profession—"

"It is not a profession, sir. It is not even a trade. High science and skill have long since left our insulted and outraged ranks; we are mere commission agents for the sale of patent quackeries. What respect has the world any longer for the great phials of ruby, and emerald, and marine blue, which, at nightfall, were once the magical emblems of our mysteries, seen afar through the dim mists of lowering atmospheres, or throwing their lurid glare upon the passers-by?...