A Day with Lord Byron 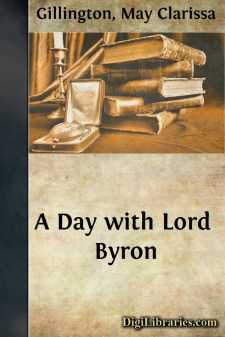 A DAY WITH BYRON.

ne February afternoon in the year 1822, about two o'clock,—for this is the hour at which his day begins,—"the most notorious personality of his century" arouses himself, in the Palazzo Lanfranchi at Pisa. George Gordon Noel, Lord Byron, languidly arises and dresses, with the assistance of his devoted valet Fletcher. Invariably he awakes in very low spirits, "in actual despair and despondency," he has termed it: this is in part constitutional, and partly, no doubt, a reaction after the feverish brain-work of the previous night. It is, at any rate, in unutterable melancholy and ennui that he surveys in the mirror that slight and graceful form, which had been idolised by London drawing-rooms, and that pale, scornful, beautiful face, "like a spirit, good or evil," which the enthusiastic Walter Scott has termed a thing to dream of. He notes the grey streaks already visible among his dark brown locks, and mutters his own lines miserably to himself,—

Through life's dull road, so dim and dirty, I have dragg'd to three-and-thirty. What have these years left to me? Nothing—except thirty-three.

An innumerable motley crowd of reminiscences—most of them bitter, sorrowful, or contemptuous, throng across his mind, shaping themselves into poignant verse:

There's not a joy the world can give like that it takes away, When the glow of early thought declines in feeling's dull decay; 'Tis not on youth's smooth cheek the blush alone, which fades so fast, But the tender bloom of heart is gone, ere youth itself be past. ..... Oh! could I feel as I have felt,—or be what I have been, Or weep as I could once have wept o'er many a vanished scene; As springs in desert found seem sweet, all brackish though they be, So, 'midst the wither'd waste of life, those tears would flow to me.

A meagre breakfast,—of claret and soda with a few mouthfuls of some Italian dish,—somewhat restores his natural vivacity: and he listens with cynical amusement to Fletcher's blood-curdling stories of the phantoms who have made night hideous. For the famous old feudal Palazzo, with its dungeons and secret chambers, has been immemorially infested with ghosts, and harassed by inexplicable noises. Fletcher has already begged leave to change his room, and then refused to occupy his new room, because, as his master reports, "there are more ghosts there than in the other!… There is one place where people were evidently walled up.… I am bothered about these spectres, as they say the last occupants were too." However, he is laughing as he descends the magnificent staircase,—the reputed work of Michael Angelo,—laughing until the shrill querulous cries of peevish children make him stop and frown. He has allowed the Leigh Hunts, with their large and fractious family, to occupy for the present the ground-floor of the Palazzo; and children are his pet abhorrence. "I abominate the sight of them so much," he has already told Moore, "that I have always had the greatest respect for the character of Herod!" No child figures in any of his poems: his own paternal feeling towards "Ada, sole daughter of my house and home," is merely a fluctuating sentiment....