A Day of Fate 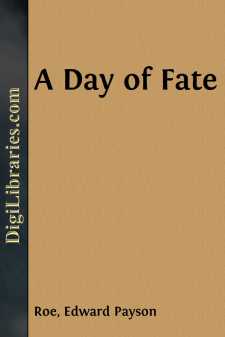 "Another month's work will knock Morton into 'pi,'" was a remark that caught my ear as I fumed from the composing-room back to my private office. I had just irately blamed a printer for a blunder of my own, and the words I overheard reminded me of the unpleasant truth that I had recently made a great many senseless blunders, over which I chafed in merciless self-condemnation. For weeks and months my mind had been tense under the strain of increasing work and responsibility. It was my nature to become absorbed in my tasks, and, as night editor of a prominent city journal, I found a limitless field for labor. It was true I could have jogged along under the heavy burden with comparatively little wear and loss, but, impelled by both temperament and ambition, I was trying to maintain a racer's speed. From casual employment as a reporter I had worked my way up to my present position, and the tireless activity and alertness required to win and hold such a place was seemingly degenerating into a nervous restlessness which permitted no repose of mind or rest of body. I worked when other men slept, but, instead of availing myself of the right to sleep when the world was awake, I yielded to an increasing tendency to wakefulness, and read that I might be informed on the endless variety of subjects occupying public attention. The globe was becoming a vast hunting-ground, around which my thoughts ranged almost unceasingly that I might capture something new, striking, or original for the benefit of our paper. Each day the quest had grown more eager, and as the hour for going to press approached I would even become feverish in my intense desire to send the paper out with a breezy, newsy aspect, and would be elated if, at the last moment, material was flashed in that would warrant startling head-lines, and correspondingly depressed if the weary old world had a few hours of quiet and peace. To make the paper "go," every faculty I possessed was in the harness.

The aside I had just overheard suggested, at least, one very probable result. In printer's jargon, I would soon be in "pi."

The remark, combined with my stupid blunder, for which I had blamed an innocent man, caused me to pull up and ask myself whither I was hurrying so breathlessly. Saying to my assistant that I did not wish to be disturbed for a half hour, unless it was essential, I went to my little inner room. I wished to take a mental inventory of myself, and see how much was left. Hitherto I had been on the keen run—a condition not favorable to introspection.

Neither my temperament nor the school in which I had been trained inclined me to slow, deliberate processes of reasoning. I looked my own case over as I might that of some brother-editors whose journals were draining them of life, and whose obituaries I shall probably write if I survive them. Reason and Conscience, now that I gave them a chance, began to take me to task severely.

"You are a blundering fool," said Reason, "and the man in the composing-room is right....