A Daughter of the Union 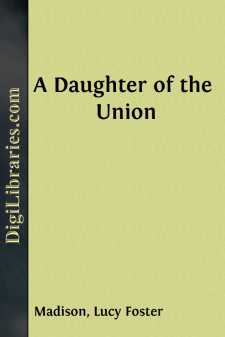 CHAPTER IWHAT GIRLS CAN DO

“That finishes everything,” exclaimed Jeanne Vance, placing a neatly folded handkerchief in a basket. “And oh, girls, what a little bit of a pile it makes!”

The five girls drew their chairs closer to the basket and gazed ruefully at its contents.

“How many handkerchiefs are there, Jeanne?” asked one.

“There are fifty handkerchiefs and five pairs of socks. It seemed like a great many when we took them to make, but what do they amount to after all?”

“There isn’t much that girls can do anyway,” spoke another. “If we were boys we could go to the war, or, if we were women we could be nurses. I don’t like being just a girl!”

“Well, I wouldn’t mind it so much if there was anything I could do,” remarked Jeanne who seemed to be the leader. “But when Dick is in the army, father in government service, and mother at work all day in the Relief Association, it is pretty hard not to be able to do anything but hem handkerchiefs and make socks.”

“A great many persons don’t even do that,” said Nellie Drew, the youngest girl of the party. “And they are grown-up people, too.”

“Then the more shame to them,” cried Jeanne indignantly. “In such a war as ours every man, woman and child in the United States ought to be interested. I don’t see how any one can help being so. For my part, I am going to do all that I can for the soldiers if it is only to hem handkerchiefs.”

“What else could we do? We can’t help being girls, and Miss Thornton was pleased when we asked for more work. She said that our last socks were done as well as women could do them. I am sure that that is something.”

“That is true,” admitted Jeanne soberly. “I have heard mother say that some of the things were so poorly made that the ladies were ashamed to send them to the front, but that often the need was so urgent that they were compelled to do it. I am willing to knit socks and to hem handkerchiefs, but I would like to do something else too. There is so much to be done that I don’t feel as if I were doing all that I might do.”

“We don’t either, Jeanne, and if you know of anything we will gladly help to do it,” cried the girls together.

“I don’t know of anything else, girls, but maybe I can think of something,” said Jeanne, looking at the earnest faces before her.

It was a bright May afternoon in the year of 1862, and the great conflict between the North and the South was waging fiercely. The terrible battle of Shiloh of the month before had dispelled some of the illusions of the North and the people were awakening to the fact that a few victories were not sufficient to overthrow the Confederacy.

Aid societies under the United States Sanitary Commission for the relief of the soldiers were springing up all over the Union, and patriotism glowed brightly inflaming the hearts of rich and poor alike. This zeal was not confined to the old but animated the minds of the young as well. Numerous instances are recorded of little girls who had not yet attained their tenth year denying themselves the luxuries and toys they had long desired and toiling with a patience and perseverance wholly foreign to childish nature, to procure or to make something of value for their country’s defenders.

Our group of girls was only one among many banded together for the purpose of doing whatever they could for the relief of the boys in blue, and their young hearts were overwhelmed with a sense of their impotence. Jeanne Vance, a tall, slender, fair-haired girl of sixteen, serious and thoughtful beyond her years, was the leader in every patriotic enterprise of her associates.

Her father since the beginning of the war had devoted himself exclusively to furthering the interests of the government; her mother was a prominent worker in The Woman’s Central Relief Association, giving her whole time to collecting supplies and money to be forwarded to the front and providing work for the wives, mothers and daughters of the soldiers....