A Daughter of the Sioux A Tale of the Indian frontier 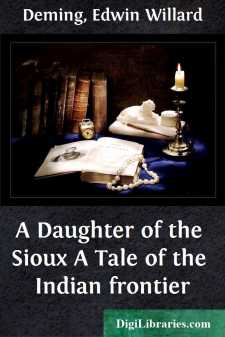 The major commanding looked up from the morning report and surveyed the post adjutant with something of perturbation, if not annoyance, in his grim, gray eyes. For the fourth time that week had Lieutenant Field requested permission to be absent for several hours. The major knew just why the junior wished to go and where. The major knew just why he wished him not to go, but saw fit to name almost any other than the real reason when, with a certain awkward hesitancy he began:

"It will be, sir, in abundant time," was the prompt reply.

"You know they sent it back for correction last month," hazarded the commander.

"And you know, sir, the error was not mine," was the instant rejoinder, so quick, sharp and positive as to carry it at a bound to the verge of disrespect, and the keen, blue eyes of the young soldier gazed, frank and fearless, into the heavily ambushed grays of the veteran in the chair. It made the latter wince and stir uneasily.

"If there's one thing I hate, Field, it is to have my papers sent back by some whipsnapper of a clerk, inviting attention to this or that error, and I expect my adjutant to see to it that they don't."

"Your adjutant does see to it, sir. I'm willing to bet a month's pay fewer errors have been found in the papers of Fort Frayne than any post in the Department of the Platte. General Williams told you as much when you were in Omaha."

The major fairly wriggled in his cane-bottomed whirligig. What young Field said was true, and the major knew it. He knew, moreover, there wasn't a more painstaking post adjutant from the Missouri to the mountains. He knew their monthly reports—"returns" as the regulations call them—were referred to by a model adjutant general as model papers. He knew it was due to young Field's care and attention, and he knew he thought all the world of that young gentleman. It was just because he thought so much of him he was beginning to feel that it was high time to put a stop to something that was going on. But, it was a delicate matter; a woman was the matter; and he hadn't the moral courage to go at it the straightforward way. He "whip sawed" again. Thrumming on the desk with his lean, bony fingers he began:—

"If I let my adjutant out so much, what's to prevent other youngsters asking similar indulgence?"

The answer came like the crack of a whip:—

"Nothing, sir; and far better would it be for everybody concerned if they spent more hours in the saddle and fewer at the store."

This was too much for the one listener in the room. With something like the sound of a suppressed sneeze, a tall, long-legged captain of cavalry started up from his chair, an outspread newspaper still full-stretched between him and the desk of the commander, and, thus hidden as to his face, sidled sniggering off to the nearest window. Young Field had fearlessly, if not almost impudently, hit the nail on the head, and metaphorically rapped the thrumming fingers of his superior officer. Some commanders would have raged and sent the daring youngster right about in arrest. Major Webb knew just what Field referred to,—knew that the fascinations of pool, "pitch" and poker held just about half his commissioned force at all "off duty" hours of the day or night hanging about the officers' club room at the post trader's; knew, moreover, that while the adjutant never wasted a moment over cards or billiards, he, the post commander, had many a time taken a hand or a cue and wagered his dollars against those of his devoted associates....