A Dash from Diamond City 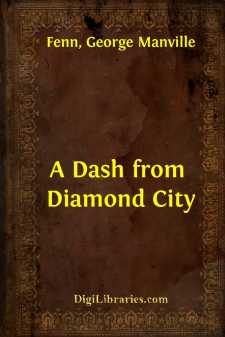 Tick, tap, tap—tap, ticker—ticker—tapper—tapper; tick—teck, tacker—tap went a typewriting machine, and scratch—scratch went two pens, in one of the minor offices connected with that vast wealth-producing industry known as the De Beers Diamond-Mines, where, seated at desk and table, three young men were hard at work, one manipulating the typewriter, one writing a letter, and the third making entries in a fat leather-covered book with broad bands and a big letter distinguishing it upon the back.

The words: “minor office in a diamond-mine,” naturally suggest wealth, Turkey carpets, french-polished furniture, and plate-glass; but the office in question was an example of simplicity, for its walls were mud and its roof corrugated-iron, while the roughness of the interior was only slightly softened down by a lining of what a carpenter calls matchboarding. In spite of its vast wealth, Kimberley is still little better than a moving camp, and holds out few prospects of ever becoming a magnificent town.

The interior of that newly-created office, allowing for the tapping of the typewriter and the scratching of the pens, was very quiet; but outside there was the strange sound produced by the mingling of voices with trampling feet and the distant whirr and rattle of machinery, till a clock began striking, followed by the clangour of a bell, and then all was changed.

“Time!” shouted the manipulator of the typewriter, springing from his stool to stretch his wiry six feet of length, at the same time spoiling a keen, manly face by distorting it with a yawn. The clerk who had been bending over the thick account-book ceased making entries, applied the blotting-paper, and closed the book with a bang, to turn round and display a pink-and-white, fat, smooth face, disfigured by nearly white eyebrows and lashes and curly whitey-brown hair. As he stood up he yawned and wrinkled his fat face a good deal; but the wrinkles died down into a smile which gave him a meek and mild appearance, the said smile being doubled directly after by his taking a little round shaving-glass out of his desk, propping it up by means of a contrivance behind, and then, by the help of a pocket-comb, proceeding to rearrange his hair, which, from the resistance offered, appeared to be full of knots and kinks.

The last to leave his desk was a manly-looking young fellow who appeared to be twenty, but who possessed documentary evidence that he was only eighteen. He neither stretched nor yawned, but drew himself up with a sigh of relief, and, after carefully locking up the letters he had written, he turned to the typist.

“Going out, Ingleborough?” he said.

“Five minutes?” dashed in his questioner.

“No; that I shan’t,” said the young man smartly; “but I will not exceed fifteen. Get out my rifle and belts, West.”

“All right,” was the reply, and as the door closed the young clerk crossed to a plain deal cupboard in the corner of the office, threw open the broad door, and revealed an arms-rack with some twenty of the newest-pattern rifles standing ready for use, and bayonets and bandoliers to match each breech-loading piece....