A Cursory History of Swearing 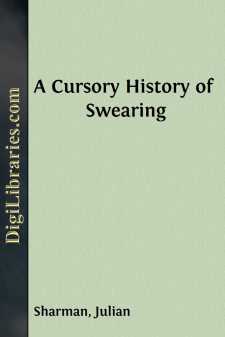 It lay in the heart of Bohemia. It was approached through a labyrinth of streets that grew denser and darker as one neared the precincts of the club. Could any of the brother Scufflers have seen the neighbourhood by day, it would have presented an appearance dismal and sordid enough. Dealers in faded wardrobes,—merchants in tinsel and rouge de théâtre,—retailers of wigs and fleshings and all manner of stage wares, seemed one with another to have made the locality their home. One missed certainly the bone-sellers and refuse-sifters of the adjacent Clare Market, and one was spared the cheap cosmetic shops and smug undertakers of the neighbouring Soho. But you were recompensed, here in the heart of mid-Bohemia, by the all-pervading odour of potations and provisions,—of banquets long past, and of banquets that were yet to come.

What wonderful odours are those that emanate from this quarter of the town! The dank vapours of Covent Garden are sweet in the nostrils of many a cockney reveller. There is no orange-peel so perfumed as the Drury orange-peel that has been concentrating its fragrance round the boards of Thespis since the days when Mohun and Hart, and Shatterel and Betterton strutted on the bare planks of the Cockpit. No scent of printer’s ink is more refreshing than that which adheres to the yards of flimsy playbill still hawked about by itinerant vendors. But the whole place has through the day-time a blear-eyed, a drunk-over-night appearance. It is like a man who is never at his best until he has supped or dined. From morn till twilight it wears this sullen and uncared-for look. Wait until nightfall, and it will positively glisten with lamps and gleam with merriment. No wonder, therefore, that it has been the birthplace of so many of those midnight carousing dens, into one of which we are tremulously seeking to enter.

It was what is called a literary and theatrical club, the Scufflers. It was literary in so far that the majority of its members lay down at night with unrealised dreams of authorship. It was theatrical to the extent that many a one was the possessor of an unacted drama coiled up in his breast coat-pocket, and was to be seen surging about managers’ doors, only waiting the glance of favour to fall upon author and manuscript. Nor was this literary impulsion entirely without fruit-bearing. Scufflers had been known to rush breathlessly into the club-room at the approach of midnight, and in an excited and panting condition have been heard to sing out for pens and paper, as the morning press would wait for no man. Personally the accomplishments of the members were many and varied. The great primus and leader of the club was a man who was alleged to dash off a leading article, take a hand at whist, and tackle a dish of kidneys at one and the same time.

We must now be supposed to have reached the entrance of the hostelry, for indeed it was a Covent Garden tavern and nothing more.

We commence to grope our way along the mouldering, unlit passage that gives access to the one apartment tenanted by the club, in which their cheerful deliberations are now proceeding. Time cannot efface the memory of that green-baize door at the end of this passage, where we were very properly brought to a stand on that first evening of our initiation. Never shall we forget how momentous seemed the issues that were depending in that inner chamber, as the announcement that there was a “stranger at the gates” was evidently being briskly canvassed there. To have the unquestioned privilege of passing and repassing that mystic portal, the barrier as it seemed between all the rhapsody and the syntax of this weary world, promised to be one of those pleasures that would well-nigh be imperishable.

The apartment entered, it was easy to discern the manner of men who had placed their mark upon its walls and wainscots....