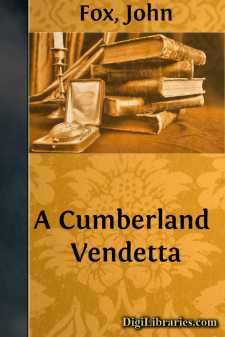 THE cave had been their hiding-place as children; it was a secret refuge now against hunger or darkness when they were hunting in the woods. The primitive meal was finished; ashes were raked over the red coals; the slice of bacon and the little bag of meal were hung high against the rock wall; and the two stepped from the cavern into a thicket of rhododendrons.

Parting the bushes toward the dim light, they stood on a massive shoulder of the mountain, the river girding it far below, and the afternoon shadows at their feet. Both carried guns--the tall mountaineer, a Winchester; the boy, a squirrel rifle longer than himself. Climbing about the rocky spur, they kept the same level over log and bowlder and through bushy ravine to the north. In half an hour, they ran into a path that led up home from the river, and they stopped to rest on a cliff that sank in a solid black wall straight under them. The sharp edge of a steep corn-field ran near, and, stripped of blade and tassel, the stalks and hooded ears looked in the coming dusk a little like monks at prayer. In the sunlight across the river the corn stood thin and frail. Over there a drought was on it; and when drifting thistle-plumes marked the noontide of the year, each yellow stalk had withered blades and an empty sheath. Everywhere a look of vague trouble lay upon the face of the mountains, and when the wind blew, the silver of the leaves showed ashen. Autumn was at hand.

There was no physical sign of kinship between the two, half-brothers though they were. The tall one was dark; the boy, a foundling, had flaxen hair, and was stunted and slender. He was a dreamy-looking little fellow, and one may easily find his like throughout the Cumberland-paler than his fellows, from staying much indoors, with half-haunted face, and eyes that are deeply pathetic when not cunning; ignorantly credited with idiocy and uncanny powers; treated with much forbearance, some awe, and a little contempt; and suffered to do his pleasure-nothing, or much that is strange-without comment.

"I tell ye, Rome," he said, taking up the thread of talk that was broken at the cave, "when Uncle Gabe says he's afeard thar's trouble comm', hit's a-comm'; 'n' I want you to git me a Winchester. I'm a-gittin' big enough now. I kin shoot might' nigh as good as you, 'n' whut am I fit fer with this hyeh old pawpaw pop-gun?"

"Shet up, Isom! Don't you go gittin' mad now. You'll be sick ag'in. I'll tend to him when the time comes." Rome spoke with rough kindness, but ugly lines had gathered at his mouth and forehead. The boy's tears came and went easily. He drew his sleeve across his eyes, and looked up the river. Beyond the bend, three huge birds rose into the sunlight and floated toward them. Close at hand, they swerved side-wise.

"They hain't buzzards," he said, standing up, his anger gone; "look at them straight wings!"

Again the eagles swerved, and two shot across the river....