A Critic in Pall Mall Being Extracts from Reviews and Miscellanies 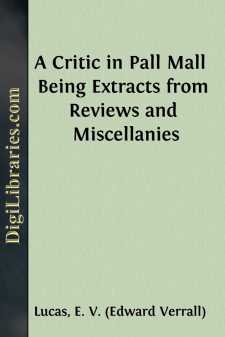 As one enters Rome from the Via Ostiensis by the Porta San Paolo, the first object that meets the eye is a marble pyramid which stands close at hand on the left.

There are many Egyptian obelisks in Rome—tall, snakelike spires of red sandstone, mottled with strange writings, which remind us of the pillars of flame which led the children of Israel through the desert away from the land of the Pharaohs; but more wonderful than these to look upon is this gaunt, wedge-shaped pyramid standing here in this Italian city, unshattered amid the ruins and wrecks of time, looking older than the Eternal City itself, like terrible impassiveness turned to stone.  And so in the Middle Ages men supposed this to be the sepulchre of Remus, who was slain by his own brother at the founding of the city, so ancient and mysterious it appears; but we have now, perhaps unfortunately, more accurate information about it, and know that it is the tomb of one Caius Cestius, a Roman gentleman of small note, who died about 30 b.c.

Yet though we cannot care much for the dead man who lies in lonely state beneath it, and who is only known to the world through his sepulchre, still this pyramid will be ever dear to the eyes of all English-speaking people, because at evening its shadows fall on the tomb of one who walks with Spenser, and Shakespeare, and Byron, and Shelley, and Elizabeth Barrett Browning in the great procession of the sweet singers of England.

For at its foot there is a green sunny slope, known as the Old Protestant Cemetery, and on this a common-looking grave, which bears the following inscription:

This grave contains all that was mortal of a young English poet, who on his deathbed, in the bitterness of his heart, desired these words to be engraven on his tombstone: Here lies one whose name was writ in water.  February 24, 1821.

And the name of the young English poet is John Keats.

Lord Houghton calls this cemetery ‘one of the most beautiful spots on which the eye and heart of man can rest,’ and Shelley speaks of it as making one ‘in love with death, to think that one should be buried in so sweet a place’; and indeed when I saw the violets and the daisies and the poppies that overgrow the tomb, I remembered how the dead poet had once told his friend that he thought the ‘intensest pleasure he had received in life was in watching the growth of flowers,’ and how another time, after lying a while quite still, he murmured in some strange prescience of early death, ‘I feel the flowers growing over me.’

But this time-worn stone and these wildflowers are but poor memorials of one so great as Keats; most of all, too, in this city of Rome, which pays such honour to her dead; where popes, and emperors, and saints, and cardinals lie hidden in ‘porphyry wombs,’ or couched in baths of jasper and chalcedony and malachite, ablaze with precious stones and metals, and tended with continual service.  For very noble is the site, and worthy of a noble monument; behind looms the grey pyramid, symbol of the world’s age, and filled with memories of the sphinx, and the lotus leaf, and the glories of old Nile; in front is the Monte Testaccio, built, it is said, with the broken fragments of the vessels in which all the nations of the East and the West brought their tribute to Rome; and a little distance off, along the slope of the hill under the Aurelian wall, some tall gaunt cypresses rise, like burnt-out funeral torches, to mark the spot where Shelley’s heart (that ‘heart of hearts’!) lies in the earth; and, above all, the soil on which we tread is very Rome!

As I stood beside the mean grave of this divine boy, I thought of him as of a Priest of Beauty slain before his time; and the vision of Guido’s St....