A Countess from Canada A Story of Life in the Backwoods 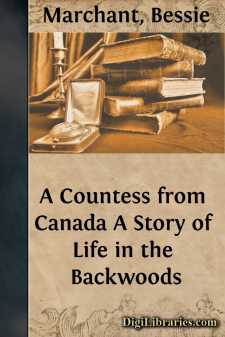 Beyond the Second Portage

Katherine Radford stretched her arms wearily above her head as she spoke. There had been five days of persistent snowfall; but this morning the clouds had broken, showing strips and patches of blue sky, and there was bright sunshine flooding the world again, with hard and sparkling frost.

"Why don't you go?" demanded Phil, who was the youngest. "Miles and me don't mind having a holiday at all."

"Speak for yourself if you like," growled Miles, who was thirteen; "but I want to get this schooling business over and done with, so that I can start doing something useful."

"And speak grammatically, please, or else keep silent. You should have said, 'Miles and I'," remarked Katherine with quite crushing dignity, as she turned from the window to take her place at the table once more. Phil thrust his tongue in his cheek, after the manner beloved of small boys, and subsided into silence and an abstracted study of his spelling book.

The schoolroom was a small chamber, partitioned off from the store by a wall of boards so thin that all conversation about buying and selling, with the gossip of the countryside thrown in, was plainly audible to the pupils, whose studies suffered in consequence. The stovepipe from the store went through this room, keeping it comfortably warm, and in winter 'Duke Radford and the boys slept there, because it was so terribly cold in the loft.

Katherine had come home from college in July, determined to teach school all winter, and to make a success of it, too, in a most unpromising part of the world. But even the most enthusiastic teacher must fail to get on if there are no scholars to teach, and at present she had only Miles and Phil, her two brothers, as pupils. This was most trying to Katherine's patience, for, of course, if there had only been pupils enough, she could have had a properly constituted school, and a salary also. She might even have had a regular schoolhouse to teach in, instead of being compelled to use a makeshift such as this. But everything must have a beginning, and so she had worked on bravely through the autumn, hoping against hope for more pupils. In the intervals between teaching the boys she kept the books for her father, and even attended to the wants of an occasional customer when 'Duke Radford was busy or absent.

The store at Roaring Water Portage was awkwardly placed for business. It stood on a high bank overlooking the rapids, and when it was built, five years before, had been the centre of a mining village. But the mining village had been abandoned for three years now, because the vein of copper had ended in a thick seam of coal, which, under present circumstances, was not worth working. Now the nearest approach to a village was at Seal Cove, at the mouth of the river, nearly three miles away, where there were about half a dozen wooden huts, and the liquor saloon kept by Oily Dave when he was at home, and shut up when he was absent on fishing expeditions....