A Conspiracy of the Carbonari 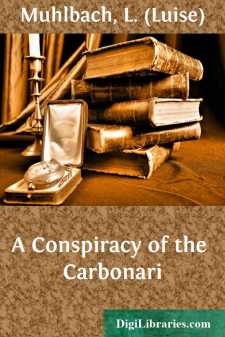 CHAPTER I. AFTER ESSLINGEN.

It was the evening of the 22d of May, 1809, the fatal day inscribed in blood-stained letters upon the pages of history, the day which brought to Napoleon the first dimming of his star of good fortune, to Germany, and especially to Austria, the first ray of dawn after the long and gloomy night.

After so many victories and triumphs; after the battles of Tilsit, Austerlitz, and Jena, the humiliation of all Germany, the triumphal days of Erfurt, when the great imperial actor saw before him a whole "parterre of kings;" after a career of victory which endured ten years, Napoleon on the 22d of May, 1809, had sustained his first defeat, lost his first battle. True, he had made this victory cost dearly enough. There had been two days of blood and carnage ere the conflict was decided, but now, at the close of these two terrible days, the fact could no longer be denied: the Austrians, under the command of the Archduke Charles, had vanquished the French at Aspern, though they were led by Napoleon himself.

Terrible indeed had been those two days of the battle of Aspern or Esslingen. The infuriated foes hurled death to and fro from the mouths of more than four hundred cannon. The earth shook with the thunder of their artillery, the stamping of their steeds; the air resounded with the shouts of the combatants, who assailed each other with the fury of rage and hate, fearing not death, but defeat; scorning life if it must be owed to the conqueror's mercy, neither giving nor taking quarter, and in dying, praying not for their own souls, but for the defeat and humiliation of the enemy!

Never since those years of battle between France and Austria has the fighting been characterized by such animosity, such fierce fury on both sides. Austria was struggling to avenge Austerlitz, France not to permit the renown of that day to be darkened.

"We will conquer or die!" was the shout with which the Austrians, for the twenty-first time, had begun the battle against the enemy, who pressed forward across three bridges from the island of Lobau in the middle of the Danube, and whom the Austrians hated doubly that day, because another painful wound had been dealt by the occupation of their capital—beautiful, beloved Vienna—the expulsion of the emperor and his family, and the possession of the German city.

Thus conquest to the Austrians meant also the release of Vienna from the mastery of the foe, the opening the way to his capital to the Emperor Francis, who had fled to Hungary.

If the French were vanquished, it meant the confession to the world that the star of Napoleon's good fortune was paling; that he, too, was merely a mortal who must bow to the will of a higher power; it meant destroying the faith of the proud, victorious French army in its own invincibility.

These were the reasons which rendered the battle so furious, so bloodthirsty on both sides; which led the combatants to rend each other with actual pleasure, with exulting rage. Each yawning wound was hailed with a shout of joy by the person who inflicted it; each man who fell dying heard, instead of the gentle lament of pity, the sigh of sympathy, the jeering laugh, the glad, victorious shout of the pitiless foe.

Then Austrian generals, eagerly encouraging their men by their own example of bravery, pressed forward at the head of their troops. The Archduke Charles, though ill and suffering, had himself lifted upon his horse, and, in the enthusiasm of the struggle, so completely forgot his sickness that he grasped the standard of a wavering battalion, dashed forward with it, and thereby induced the soldiers to rush once more, with eager shouts of joy, upon the foe.

More than ten times the village of Aspern was taken by the French, more than ten times it was recaptured by the Austrians; every step forward was marked by both sides with heaps of corpses, rivers of blood....