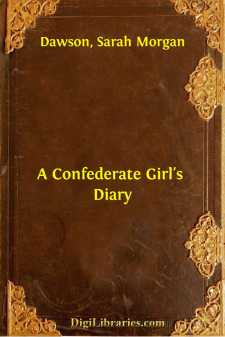 It is perhaps due to a chance conversation, held some seventeen years ago in New York, that this Diary of the Civil War was saved from destruction.

A Philadelphian had been talking with my mother of North and South, and had alluded to the engagement between the Essex and the Arkansas, on the Mississippi, as a brilliant victory for the Federal navy. My mother protested, at once; said that she and her sister Miriam, and several friends, had been witnesses, from the levee, to the fact that the Confederates had fired and abandoned their own ship when the machinery broke down, after two shots had been exchanged: the Federals, cautiously turning the point, had then captured but a smoking hulk. The Philadelphian gravely corrected her; history, it appeared, had consecrated, on the strength of an official report, the version more agreeable to Northern pride.

"But I wrote a description of the whole, just a few hours after it occurred!" my mother insisted. "Early in the war I began to keep a diary, and continued until the very end; I had to find some vent for my feelings, and I would not make an exhibition of myself by talking, as so many women did. I have written while resting to recover breath in the midst of a stampede; I have even written with shells bursting over the house in which I sat, ready to flee but waiting for my mother and sisters to finish their preparations."

"If that record still existed, it would be invaluable," said the Philadelphian. "We Northerners are sincerely anxious to know what Southern women did and thought at that time, but the difficulty is to find authentic contemporaneous evidence. All that I, for one, have seen, has been marred by improvement in the light of subsequent events."

"You may read my evidence as it was written from March 1862 until April 1865," my mother declared impulsively.

At our home in Charleston, on her return, she unstitched with trembling hands a linen-bound parcel always kept in her tall, cedar-lined wardrobe of curled walnut. On it was scratched in ink "To be burned unread after my death"; it contained, she had once told me, a record of no interest save to her who had written it and lacked the courage to re-read it; a narrative of days she had lived, of joys she had lost; of griefs accepted, of vain hopes cherished.

From the linen, as the stitches were cut, fell five blank books of different sizes. Two, of convenient dimensions, might have been intended for diaries; the other three, somewhat unwieldy, were partly used ledgers from Judge P. H. Morgan's office. They were closely written in a clear, firm hand; the ink, of poor quality, had faded in many places to a pale brown scarcely darker than the deep yellow to which time had burned the paper. The effort to read under such conditions, and the tears shed over the scenes evoked, might well have cost my mother her sight; but she toiled for many weeks, copying out the essential portions of the voluminous record for the benefit of the Northerner who really wished to know....