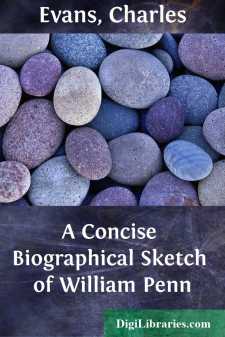 The following is a brief sketch of the life of one who, though perhaps more widely known as the Proprietor and Founder of Pennsylvania, was also eminent as a minister of the gospel in the Society of Friends, and distinguished for his superior intellectual abilities, his varied culture, and, above all, for his devoted Christian character, exemplified both in adversity and prosperity. It is taken principally from a work entitled "Friends in the Seventeenth Century."

He was the son of William Penn, who, trained to nautical life, had by his genius and courage risen rapidly in the navy, until at the age of twenty-nine he became "Vice-Admiral of the Straits." From the account of his life and public career, given by Granville Penn, a descendant, he appears to have been a man who made self-interest a leading principle of conduct, but who, while eagerly coveting wealth and honor, was never accused of being corrupt as a public servant. His son William was born in London, in 1644, and resided with his mother at Wanstead, in Essex, while his father was absent with the fleet over which he had command.

Owing to information received by Cromwell, through some of the spies kept by him in attendance upon the exiled Charles and his court, that, notwithstanding he had sanctioned the promotion of Admiral Penn, and largely rewarded him by an estate in Ireland, for some losses he had sustained there, he was secretly making overtures to bring the squadron he commanded into the service of the Royalists, he lost favor with the Protector. On his return from an unsuccessful expedition against the Spanish West India Islands, he was deprived of his command and thrown into prison, whence Cromwell generously liberated him at his own humble petition. He then took his family over to Ireland, where he continued to reside for some years, on the estate which Cromwell had had bestowed upon him, and which was near Cork.

In a manuscript written by Thomas Harvey, reciting an account given to him by William Penn, of some of the circumstances of his early life, and which was first published in "The Penns and Peningtons," by M. Webb, it is stated, "That while he was but a child living at Cork with his father, Thomas Loe came thither. When it was rumored a Quaker was come from England, his father proposed to some others to be like the noble Bereans, and hear him before they judged him. He accordingly sent to Thomas Loe to come to his house; where he had a meeting in the family. Though William was very young, he observed what effect T. Loe's preaching had on the hearers. A black servant of his father could not restrain himself from weeping aloud; and little William looking on his father, saw the tears running down his cheeks also. He then thought within himself, 'What if they would all be Quakers!'" This opportunity he never quite forgot; the remembrance of it still recurring at times. William Penn was then about eleven years of age, and was being educated by a private tutor.

On the retirement of Richard Cromwell from the position for which he had been appointed by his father, Admiral Penn declared for Charles Stuart, and lost no time in going over to the Continent to pay court to him whom he had no doubt would soon be recalled to the throne. Charles employed him in secret service, and rewarded him by the honors of knighthood, and by becoming his debtor for one hundred pounds.

When a little over fifteen years of age, William Penn entered as a "gentleman commoner," at Oxford, where he remained three years, distinguishing himself as a hard and successful student....