A Comparative Study of the Negro Problem The American Negro Academy. Occasional Papers No. 4 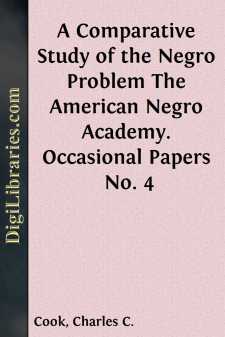 Living as we do in the midst of a people, which, if not of unmixed English blood, is at least English in institutions, language and laws, where can we better read our destiny than in the pages of English history? “In our own hearts,” some will at once answer. But no, the thread of our fate is, to-day, more in the hands of the American people than in our own.

The three nations, which have in modern times, most startled the world by their progress, are England, the United States, and Japan. In the early years of the seventeenth century, a part of the English people, impatient of the restrictions of their time, founded upon this continent a new and more rapidly progressive civilization than that which they left behind them in their old homes. But this was no beginning, only an acceleration of the movement, which had already placed England among the foremost powers of the earth. To study the conditions attending upon the entrance of the American people upon their path of progress, we must follow the pilgrims back to and into their English homes. What, then, does the history of the American people teach us? A simple lesson, still more impressively told by the history of Japan: that time may become an insignificant element in the making of a powerful nation. What it took England ten centuries to accomplish, the United States has done in two hundred, and Japan in thirty years. What mighty leavening agency has been employed, what secret learned from nature’s workshop, that these almost incredible results, should have been so quickly, yet beyond question so well, won? The answer may be given in two words: England was chiefly hand-made, the United States, and above all Japan, have been made by machinery. Richly endowed with human genius, as with natural resources, only time enough was needed to transplant modern political institutions, and economic and industrial machinery, and to train natives in their use, to enable Japan to raise herself, in one generation, high in the scale of progressive nations.

Thirty years ago, Japan stood hesitatingly upon the threshold of her hermit’s cell, and considered whether she should go out and join the throng of bustling Europeans. America, England and Holland had beaten furiously at her doors, demanding her answer. At this fateful moment, the daimio Okubu thus addressed the Mikado—“Since the middle Ages our Emperor has lived behind a screen and has never trodden the earth. Nothing of what went on outside his screen ever penetrated his sacred ear; the imperial residence was profoundly secluded, and, naturally, unlike the outer world. Not more than a few court nobles were allowed to approach the throne, a practice most opposed to the principles of Heaven. This vicious practice has been common in all ages. But now, let pompous etiquette be done away with, and simplicity become our first object. Kioto is in an-out-of-the way position, and is unfit to be the seat of government! Let His Majesty take up his abode temporarily at Ozaka, removing his capital hither, and thus cure one of the hundred abuses which we inherit from past ages.”

“The young Mikado, Mutsuhito, came in person to the meetings of the council of state, and before the daimios and court nobles, promised on oath that a deliberative assembly should be formed; all measures be decided by public opinion; the uncivilized customs of former times should be broken through; and the impartiality and justice displayed in the workings of nature, be adopted as a basis of action; and that intellect and learning should be sought for throughout the world, in order to establish the foundations of empire.” “These words,” says the translator, “seem an echo of the prophetic question of the Hebrew seer: Can a nation be born at once.”

In 1868 the quickly accomplished revolution occurred, which overthrew a feudal aristocracy which had endured for nearly seven hundred years....