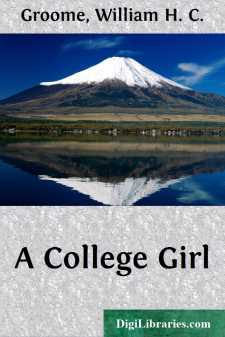 This is the tale of two terraces, of two families who lived therein, of several boys and many girls, and especially of one Darsie, her education, adventures, and ultimate romance.

Darsie was the second daughter in a family of six, and by reason of her upsetting nature had won for herself that privilege of priority which by all approved traditions should have belonged to Clemence, the elder sister. Clemence was serene and blonde; in virtue of her seventeen years her pigtail was now worn doubled up, and her skirts had reached the discreet level of her ankles. She had a soft pink and white face, and a pretty red mouth, the lips of which permanently fell apart, disclosing two small white teeth in the centre of the upper gum, because of which peculiarity her affectionate family had bestowed upon her the nickname of “Bunnie.” Perhaps the cognomen had something to do with her subordinate position. It was impossible to imagine any one with the name of “Bunnie” queening it over that will-o’-the-wisp, that electric flash, that tantalising, audacious creature who is the heroine of these pages.

Darsie at fifteen! How shall one describe her to the unfortunates who have never beheld her in the flesh? It is for most girls an awkward age, an age of angles, of ungainly bulk, of awkward ways, self-conscious speech, crass ignorance, and sublime conceit. Clemence had passed through this stage with much suffering of spirits on her own part and that of her relations; Lavender, the third daughter, showed at thirteen preliminary symptoms of appalling violence; but Darsie remained as ever that fascinating combination of a child and a woman of the world, which had been her characteristic from earliest youth. Always graceful and alert, she sailed triumphant through the trying years, with straight back, graceful gait, and eyes a-shine with a happy self-confidence. “I am here!” announced Darsie’s eyes to an admiring world. “Let the band strike up!”

Some inherent quality in Darsie—some grace, some charm, some spell—which she wove over the eyes of beholders, caused them to credit her with a beauty which she did not possess. Even her family shared in this delusion, and set her up as the superlative in degree, so that “as pretty as Darsie” had come to be regarded a climax of praise. The glint of her chestnut hair, the wide, bright eyes, the little oval face set on a long, slim throat smote the onlooker with instant delight, and so blinded him that he had no sight left with which to behold the blemishes which walked hand in hand. Photographs valiantly strove to demonstrate the truth; pointed out with cruel truth the stretching mouth, the small, inadequate nose, but even the testimony of sunlight could not convince the blind. They sniffed, and said: “What a travesty! Never again to that photographer! Next time we’ll try the man in C— Street,” and Darsie’s beauty lived on, an uncontroverted legend.

By a triumph of bad management, which the Garnett girls never ceased to deplore, their three brothers came at the end instead of the beginning of the family....