by A. H. (Arthur Henry) Bullen 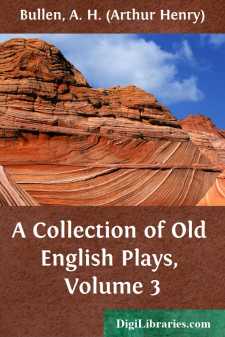 This clever, though somewhat tedious, comedy was published anonymously in 1606. There is no known dramatic writer of that date to whom it could be assigned with any great degree of probability. The comic portion shows clearly the influence of Ben Jonson, and there is much to remind one of Lyly's court-comedies. In the serious scenes the philosophising and moralising, at one time expressed in language of inarticulate obscurity and at another attaining clear and dignified utterance, suggest a study of Chapman. The unknown writer might have taken as his motto a passage in the dedication of Ovid's Banquet of Sense:— "Obscurity in affection of words and indigested conceits is pedantical and childish; but where it shroudeth itself in the heart of his subject, uttered with fitness of figure and expressive epithets, with that darkness will I still labour to be shrouded." Chapman's Gentleman Usher was published in the same year as Sir Gyles Goosecappe; and I venture to think that in a passage of Act III., Scene II., our author had in his mind the exquisite scene between the wounded Strozza and his wife Cynanche. In Strozza's discourse on the joys of marriage occur these lines:—

"If he lament she melts herselfe in teares;    If he be glad she triumphs; if he stirre    She moon's his way: in all things his sweete Ape."

The charming fitness of the expression "sweet ape" would impress any capable reader. I cannot think that by mere accident the anonymous writer lighted on the same words:—

"Doe women bring no helpe of soule to men?    Why, friend, they either are mens soules themselves    Or the most witty imitatrixes of them,    Or prettiest sweet apes of humane soules."

From a reference to Queen Elizabeth in Act I., Scene I., it is clear that Sir Gyles Goosecappe was written not later than 1603. The lines I have quoted may have been added later; or our author may have seen the Gentleman Usher in manuscript.

Chapman's influence is again (me judice) apparent in the eloquent but somewhat strained language of such a passage as the following:—

"Alas, my noble Lord, he is not rich,    Nor titles hath, nor in his tender cheekes    The standing lake of Impudence corrupts;    Hath nought in all the world, nor nought wood have    To grace him in the prostituted light.    But if a man wood consort with a soule    Where all mans sea of gall and bitternes    Is quite evaporate with her holy flames,    And in whose powers a Dove-like innocence    Fosters her own deserts, and life and death    Runnes hand in hand before them, all the skies    Cleare and transparent to her piercing eyes.    Then wood my friend be something, but till then    A cipher, nothing, or the worst of men."

Sir Gyles Goosecappe is the work of one who had chosen the "fallentis semita vitae"; who was more at home in Academic cloisters than in the crowded highways of the world. None of the characters bears any impression of having been drawn from actual life....