A Coal From The Altar, To Kindle The Holy Fire of Zeale In a Sermon Preached at a Generall Visitation at Ipswich 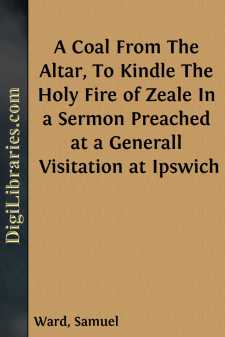 To my reverend Friend Mr.SAMUEL WARD.

Sir, your Sermon which I copied partly from your mouth, and partly from your notes, I have adventured into the light; encouraged by the approbation, and earnest entreaty of such, whose judgements you reverence, and whose love you embrace: who also have made bolde heere and there to varie some things, not of any great consequence, if I can judge. I was loth to smoother such fire in my brest; but to vent it, to enflame others. If you shall blame me, I know others will thanke mee. What I have done, is out of Zeale to God and his Church.

This watch-word of Christ, if it be not now a word in season, I know not when ever it was, or will bee: Would he now vouchsafe to bestow a letter upon his Church heere on earth; should hee need to alter the tenour of this? which being the last, to the last of the seaven Churches, why may it not (saith an Ancient, upon this text) typifie the estate of the last Age of his Churches? the coldnesse whereof himselfe hath expressely foretolde. And if God should now send through he earth such surveying Angels as Zacharie mentions, chapter 1. Could they returne any other observation of their travailes then theirs; The whole world lies in lukewarmnesse? which makes mee often in my thoughts proportion these ends of time, to the like period of Davids age, when no cloathes were enough to keepe heare in him. Faith I grant is a more radicall, vitall, and necessary grace; but yet not so wholly out of grace with the times, as poore Zeale; which yet if by any meanes it might once againe be reduced into favour and practice, before Time sets, and bee no more; I doubt not but Christ would also yet once againe in this evening of the world, come and Sup with us; A favour including all other in it.

My desire especially is, that this our Iland might take it to it selfe, as well as if it had by name beene directed to it; what would it hurt us to make an especiall benefit and use of it? Some of our owne, have so applyed it; (whether out of their judgements, or affections, I say not.) Learned Fulk marvels if it were not by a Propheticall spirit penned for us: others more resolutely have made it a singular type of purpose for us. Their warrant I know not; especially if it bee true which all travellers tell you, That they finde more zeale at home then abroad. We are I grant in sundry respects equall to Laodicea: Even the very names thereof, as well the first and oldest in regard of the blessings of God, Διος πολις Gods Darling, as the later in regard of good Lawes and Civility, Laodicea, How well doe they become us? As rich as they, and that in the very same commodity of woolls; Abounding as they with many learned Zenoes & bountifull Hieroes; Parallel in all regards; I would I could say lukewarmnesse excepted. But I must bee a faithfull and true witnesse, and yet this is all I have to say; It was, as I conceive, Laodicea's complexion and not her constitution, her practice not her orders, personall lukewarmnesse not legall, which Christ strikes at....