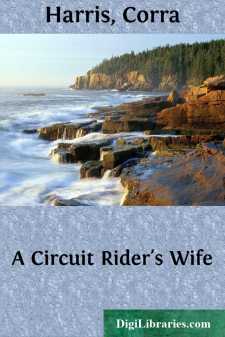 CHAPTER I I AM CHOSEN INSTEAD OF THE PRAYER MEETING VIRGIN

If you will look back over the files of the "Southern Christian Advocate," published at the time in Macon, Georgia, you will find the following notice—by a singular coincidence on the page devoted to "obituaries": "Married—Mary Elizabeth Eden to William Asbury Thompson. The bride is the daughter of Colonel and Mrs. Eden, of Edenton; the groom is the son of the late Reverend Dr. and Mrs. Asbury Thompson, and is serving his first year in the itinerancy on the Redwine Circuit. We wish the young people happiness and success in their chosen field."

"Chosen field" had reference to the itinerancy, not matrimony. And that was my "obituary" if I had only known it. For after that, if I was not dead to the world, I only saw it through the keyhole of the Methodist Discipline, or lifted and transfigured by William's sermons—a straight and narrow path that led from the church door to the grave.

But now, after an absence of thirty years, I am addressing this series of letters to the people of the world concerning life and conditions in another, removed from this one by the length of long country roads, by the thickness of church doors, and by the plate glass surface of the religious mind. They will record some experiences of two Methodist itinerants and whatever I think besides, for they are written more particularly to relieve my mind of a very great burden of opinions. For William has been promoted. He has received his LL. D. in the Kingdom of Heaven by this time if there are any degrees or giving of degrees there, along with Moses and Elijah, and I doubt if there is a more respected saint in that great company. We buried him a year ago in the graveyard behind Redwine Church.

I was born in Edenton, a little white-and-blue town in Middle Georgia, and my name was recorded in the third generation of Edens on the baptismal registry of St. John's Church there. William was born somewhere in a Methodist parsonage, and his name is probably written on the first page of the oldest predestination volume in Heaven. In Edenton the "best families" attended the Episcopal Church. It was a St. John's, of course, though why this denomination should be so partial to that apostle is a mystery, for his autobiography, as recorded in the New Testament, reads more like that of a campmeeting Methodist than any other disciple's. As a child its presence there at the end of the shaded village street was real to me, like my mother's. I did not repent in it as one must do in a Methodist or Baptist church, but I grew up in it like a daughter in the house of the Lord. As a girl on Sabbath mornings I entered it with all the mincing worldliness of my young mind unabashed. Later I was "confirmed" in it and experienced some of the vanity of that high spiritual calm which attends quick conversions in other churches. And to this day there is something ineffably sweet and whimsically inconsistent to me in an Episcopal saint. The fastidious stamina of their spirituality which never interferes with their worldliness is so satisfyingly human....