A Chronicle of London from 1089 to 1483 Written in the Fifteenth Century, and for the First Time Printed from MSS. in the British Museum 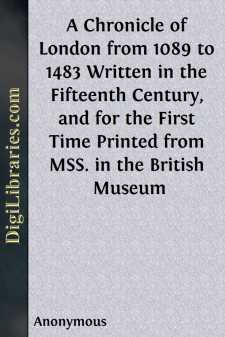 The present period is so distinguished for historical research, that the publication of an English Chronicle, written in the fifteenth century, will not it is presumed require any other prefatory remarks to recommend it to attention, than a brief account of the MSS. from which it has been transcribed. Two copies are extant in the British Museum; the one in the Harleian MS. 565, the other in the Cottonian MS. Julius B. i. and the material variations between them are either alluded to, or inserted in the Notes. The copy in the Harleian MS. ends with the 22nd year of the reign of Henry the Sixth, Anno 1442, about which time the volume was evidently written: but the other transcript, which is in a much later hand, is continued to the death of Edward the Fourth, Anno 1483, though after the accession of that monarch the narrative is barren and unsatisfactory. It may therefore be inferred that the original compiler did not survive the death of Henry the Sixth, and that the continuation was by another person. With the events of that period the writer is consequently to be deemed contemporary; and all which he relates of the reigns of Henry the Fourth, Fifth, and Sixth, are peculiarly deserving of notice; for some curious facts are mentioned, many of which have never, it is believed, been so fully detailed, even if they were previously known; whilst of earlier times his statements are as worthy of credit as those of other Chroniclers who did not live in the ages of which they respectively treat.

This volume is called “A Chronicle of London” in the title-page, from the author having so particularly confined himself to the Metropolis; and still more, because he has, like his successor Fabian, commenced each year with the election of the Lord Mayors and Sheriffs of London, whose names are uniformly recorded, but unfortunately no clue exists by which the name of the writer can be ascertained.

To the history of England however, no less than to that of London, this Chronicle will, it is confidently expected, be considered a valuable addition; and the laudable avidity evinced by the Corporation, under whose patronage it appears, as well as by numerous natives of the metropolis, to possess every work relating to its early history, justifies the hope that by them at least it will be favourably received.

Towards the end of the volume the following are introduced, the most important of which have, with the obliging permission of Henry Woodthorpe, Esq. the Town Clerk, been copied from the invaluable muniments in the City Archives.

A curious on the dispute between King Edward the First and the King of France, relative to some lands in Gascony in 1295. From the MS. in the Town Clerk’s Office, marked Liber Custumarium.

A fragment of a on the treacherous conduct of Sir Thomas Turbeville, in 1296. From the Cottonian MS. Caligula A. xviii.

A from King Edward the Third to Edward Prince of Wales, giving an account of the Battle of Scluyse, dated 28th June, 14 Edward III. 1340. From the MS. in the Town Clerk’s Office, marked Letter F.

A from Edward the Black Prince to the Mayor, Aldermen, and Commonalty of London, dated 22nd of October 1356, detailing the proceedings of the English Army under his command, and informing them of the Battle of Poictiers. From the MS. in the Town Clerk’s Office, marked Letter G.

A from a Priest, named Robert Prite, to some Nobleman, dated 8th of December 1356; in which he speaks of the Battle of Poictiers, and relates other news of the times. From the original in the Cottonian MS. Caligula D. iii.

A of Bernard Du Troy, a Gascon gentleman, made on his death-bed, 1st of July 1361, that he was the individual who took John King of France prisoner at the Battle of Poictiers. Also from the Cotton MS. Caligula D. iii.

A of Richard II., dated at Chelmsford on the 5th of July 1381, to the Earl of Warwick and others, denying that Wat Tyler and his followers were supported by his authority; and commanding them to use all possible means for the preservation of the peace in Warwickshire, and the places under their jurisdiction. Also from the Cottonian MS. Caligula D. iii.

A , by Lydgate, describing the Expedition of Henry the Fifth into France, the Battle of Agincourt, and the magnificent Pageant prepared by the City of London, in honour of his return to the Metropolis. From the Harleian MS. 565.

Another , by Lydgate, describing the Pageant and Reception of Henry the Sixth into London on the 21st of February 1431, after his coronation as King of France....