A Chariot of Fire 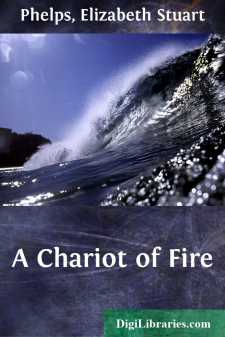 A CHARIOT OF FIRE

When the White Mountain express to Boston stopped at Beverly, it slowed op reluctantly, crashed off the baggage, and dashed on with the nervousness of a train that is unmercifully and unpardonably late.

It was a September night, and the channel of home-bound summer travel was clogged and heaving.

A middle-aged man—a plain fellow, who was one of the Beverly passengers—stood for a moment staring at the tracks. The danger-light from the rear of the onrushing train wavered before his eyes, and looked like a splash of blood that was slowly wiped out by the night. It was foggy, and the atmosphere clung like a sponge.

He turned, facing towards the branch road which carries the great current of North Shore life.

"How soon can I get to Gloucester?" he demanded of one who brushed against him heavily. He who answered proved to be of the baggage staff, and was at that moment skilfully combining a frown and a whistle behind a towering truck; from this two trunks and a dress-suit case threatened to tumble on a bull-terrier leashed to something invisible, and yelping in the darkness behind.

"Lord! This makes 'leven dogs, cats to burn, twenty-one baby-carriages, and a guinea-pig travellin' over this blamed road since yesterday—What's that? Gloucester?—6.45 to-morrow morning."

"Oh, but look here!" cried the plain passenger, "that won't do. I have got to get to Gloucester to-night."

"So's this bull-terrier," groaned the baggage-handler. "He got switched off without his folks—and I've got a pet lamb in the baggage-room bleatin' at the corporation since dinner-time. Some galoot forgot the crittur. There's a lost parrot settin' alongside that swears in several foreign languages. I wish to Moses I could!"

The passenger experienced the dull surprise of one in acute calamity who wonders that another man can jest. He turned without remark, and went to the waiting-room; he limped a little, for he was slightly lame. The ticket-master was locking the door of the office, and looked sleepy and fagged.

"Where's the train to Gloucester?"

"Gone half an hour ago."

The official pointed to the clock, on whose face an ominous expression seemed to rest, and whose hands marked the hour of half-past twelve.

"But I have got to get to Gloucester!" answered the White Mountain passenger. "We had an accident. We're late. I ain't much used to travellin'—I supposed they'd wait for us. I tell you I've got to get there!"

In his agitation he gripped the arm of the other, who threw the grasp off instinctively.

"You'll have to walk, then. You can't get anything now till the newspaper train."

"Sho!" said the ticket-master. "That's too bad. Can you afford a team? You might try the stables. There's one or two around here."

The ticket-master locked the doors of the station and walked away, but did not go far. A humane uneasiness disturbed him, and he returned to see if he could be of any use to the afflicted passenger....