A Chapter of Adventures 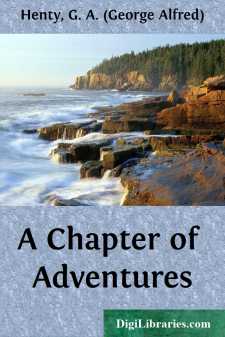 A FISHING VILLAGE Of the tens of thousands of excursionists who every summer travel down by rail to Southend, there are few indeed who stop at Leigh, or who, once at Southend, take the trouble to walk three miles along the shore to the fishing village. It may be doubted, indeed, whether along the whole stretch of coastline from Plymouth to Yarmouth there is a village that has been so completely overlooked by the world. Other places, without a tithe of its beauty of position, or the attraction afforded by its unrivalled view over the Thames, from Gravesend to Warden Point, ever alive with ships passing up and down, have grown from fishing hamlets to fashionable watering-places; while Leigh remains, or at any rate remained at the time this story opens, ten years ago, as unchanged and unaltered as if, instead of being but an hour's run from London, it lay far north in Scotland.

Its hill rises steeply behind it; there is room only for the street between the railway and the wharves, and for a single row of houses between the line and the foot of the hill. To get into Leigh from the country round it is necessary to descend by a steep road that winds down from the church at the top of the hill; to get out again you must go by the same way. The population is composed solely of fishermen, their families, and the shopkeepers who supply their necessities. The men who stand in groups in the street and on the wharf are all clad in blue guernseys or duck smocks and trousers of pilot cloth or canvas. Broad-built sturdy men are they, for in point of physique there are few fishermen round the coast who can compare with those of Leigh.

A stranger in the place would think that the male population had nothing to do but to stand in the street and talk, but night is for the most part their time for work; although many of the bawleys go out on the day-tide also, for at Leigh the tide is all-important. For five hours in the day it washes the foot of the wharves, for seven a wide expanse of mud stretches away to Canvey Island in front, and Southend Pier to the east.

At the wells—for Leigh still depends for water on its wells—are, during the hours at which water is permitted to be drawn, lines of twenty women and girls with pails, each patiently waiting her turn. There are not many boys about, for boys require more sleep than men, and a considerable portion of their time on shore is spent in bed.

It is ten o'clock in the day; the bawleys have returned from the fishing grounds, and scores of them have anchored in the Ray—a deep stretch of water lying between the spit of sand that extends from the end of Canvey Island close up to Southend Pier, and the mud-flats of Leigh. The flats are still uncovered, but the tide is rising fast in the winding channel leading up to the village. In a few minutes there will be water enough for the boats, and already these can be seen leaving the bawleys and making for the mouth of the channel. The wind is fair, and each boat hoists its sail, white or yellow or brown, and with the crew sitting up to windward comes flying along the shallow channel, making, as they always do, a race of it home....